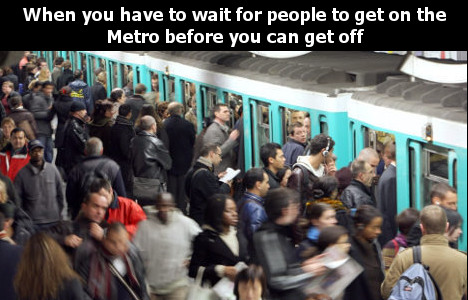 Now we can all agree that we're lucky to be living in such a great city as Paris, and I'm sure you can find endless lists on the internet, waxing lyrical about all the great things about the City of Light.

But what the internet needs is another list, and who doesn’t like a good moan from time to time, so here are a few gripes about life in Paris. Let's start with this peculiar oddity. It's great to find so many independent stores alive and well in Paris, but this can lead to your favourite cave (wine merchant), restaurant, cafe, fromagerie, bar, being “exceptionally” closed (or fermeture exceptionnelle as they call it) just when you needed it most.

They seem to just make up opening times depending on whether they feel like working.

There's no smoke without Tabac I'm sure there's probably a reason for this, and I don't even smoke, but even I find it a bit baffling that in a country where the average person puts an industrial chimney to shame, there's only one type of shop you can buy cigarettes from.

And it usually closes around 9pm! If it's to discourage people from taking up the habit, I think it's fair to say it didn't work. Oh my, this one's enough to get any former London Tube user seething.

Anyone that uses the Paris Metro will be pretty accustomed to being greeted with people blindly walking on as soon as the doors open, or at very best, being left a slender pathway to manoeuvre their way onto the platform. Ahhh, the lovely Parisian terrace, there isn't anything quite like sitting down with a fine wine and having a good old chin wag with your mates… In July.

But Parisians will insist on sticking it out on the terrace till at least November, come rain or shine, meaning you’re often left enjoying your wine in the freezing cold, even if there are numerous free tables inside! Mon dieu! Oula! Now we can accept the French know what they're doing with their wine, but the beer…. Not so génial!

Unless you're bobo-ing it up somewhere with an, albeit good, but over priced demi of local, micro brewed IPA, served in a bloody wine glass, the chances are your choice of beer will be limited to Kro, Pelforth, 1664 and the usual suspects.

What's worse, the beer is often flat as a crêpe, with less life in it than a Mecca bingo night in Stevenage (small commuter town to the North of London, not known for being that lively). I've never driven in Paris, but from the reviews it doesn't sound all that good. But one thing I have seen, or heard rather, is that the Parisians are totally “honk” happy.

If you slow them down in any way, then they are on the horn. They’ll beep you even if you're crossing the road at a distance. It’s just a shame you can’t give one back. Brasseries. They're so French aren't they? Among other things you can almost always get some decent grub at a good price. But is it a Cafe? Sports bar? Restaurant? Pub? Some even go as far as trying to be a make shift night club past midnight (don't ask me how I know this).

They can try to be so many different things, that in the end, you can be left with a soulless something… that isn't really anything.

To pee or not to pee?

It shouldn't be a question, but unfortunately the Parisians usually only have one answer if they're ever caught short. For a city as beautiful as Paris, it's a damn shame to douse the place in urine, meaning although there's plenty for your eyes to marvel at, your nose is less than pleased.

And sometimes you can be lucky enough to witness people doing the crime in broad daylight! Lovely! Yeah, I know, it's obvious, but it has to be here. The Parisians don’t appear to like to get their hands dirty when it comes to dog muck, and I’m told it used to be worse! I've heard stories of a Paris Poop Police on motorbikes, hoovering up reported mess off the street in years gone by, and although it’s hardly the type of glamourous job to brag about to your in laws, it sounds like a good idea to me.

Not heard of Excusez moi!

Even after a few weeks in Paris you could be forgiven for thinking you're invisible when walking along the street.

Parisians just don’t seem to acknowledge other people's existence by making the ever-so-slight but necessary effort to move out of the way for them when they walk past each other.

And when you hear stories of parents having to weave their kids past people conga style, just because people refuse to move out the way, it’s a bit much. I've heard it described as a game, and if you don't play it, well, you lose.

So there you have it, a petite protest about life in Paris. Obviously the pros outweigh these cons, but sometimes it’s good to vent, and writing this was far less hassle than going on strike.