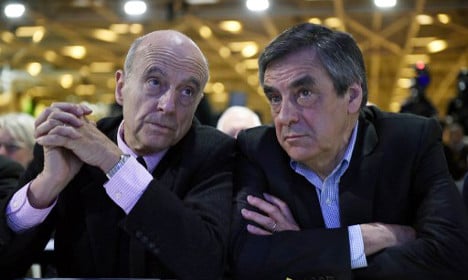 Alain Juppé, left, and Francois Fillon. Photo: AFP
Fillon goes into this weekend's run-off the clear favourite to clinch the nomination. The winner of the primary is widely expected to meet far right leader Marine Le Pen in the second round of the presidential election in May.
In the first round of voting on Sunday, Fillon outpolled his rival, fellow former prime minister Alain Juppé, by 15 percentage points.
Scrambling to make up ground after having led the race from the start, Juppé went on the attack Tuesday demanding that Fillon, a conservative Catholic, clarify his position on abortion.
Fillon, a father of five, had previously insisted that abortion was a “basic right” but in June appeared to qualify his position.
“It's not what I meant. What I meant is that it's a right that no one will reverse. But philosophically, given my faith, I cannot approve of abortion,” Fillon, who was Sarkozy's prime minister from 2007-2012, said at the time.
Juppé, seen as the more progressive of the two on social issues, accused him of flip-flopping on a right that enjoys broad consensus in France, 41 years after abortion was legalised.
'Lowering the tone'
“That's the difference between us. While I consider it (abortion) to be a basic right, he wrote as much and then came back on it,” Juppé told Europe 1 radio, demanding that Fillon “clarify his position.”
Fillon, who has courted the Catholic right by vowing to amend a gay marriage law to prevent same-sex adoptions, accused Juppé of “lowering the tone” of the campaign.
“Did I ever once take a stand against abortion?” he asked. “I never thought my friend Alain Juppé would stoop so low.”
Juppé faces an uphill battle to close the gap with Fillon in five days.
On the economy, the two are in broad agreement on what they see as the need to slash spending and taxes after four years of Socialist rule.
But they disagree on how far to go.
Fillon has pledged to cut half a million public sector jobs, around twice as many as Juppé, who as prime minister in 1995 tried to push through reforms that sparked the biggest demonstrations since May 1968.
Juppé on Tuesday said Fillon's proposals were “too tough” and would never make it past the French people.