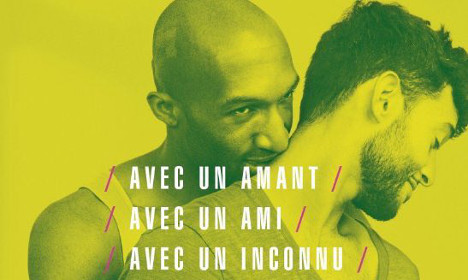 Photo: France's Ministry of Health
France's Health Ministry is in the middle of an HIV awareness campaign, in which it has commissioned the printing of posters featuring men embracing and kissing, with text promoting condom use and HIV testing.
“Situations vary, so do protection methods,” the posters read.
The posters were displayed in 130 towns across France, but prompted complaints in 12, where local authorities requested them to be removed.
The mayor of Aulnay-sous-Bois, near Paris was among those who demanded the removal of the campaign posters, adding his own banner across the images with the words “protect our children” (see tweet below).
Socialist MP Daniel Goldberg criticized the move: “A poster with a woman kissing a man would never have been removed. This has a name: Homophobia”.

JC Decaux, the company that hung up the posters, had to remove the offending images as they are contractually obliged to following complaints.
But that's simply not good enough, says Health Minister Marisol Touraine.
At first she tried to combat the towns' decisions by love bombing them via social media.
She shared one of the campaign images on her Twitter account with the words “Some people refuse to see two men together and have censored this campaign. So share it! Your retweets are the most beautiful response.”

By Tuesday, she decided to take matters further and announced that she would be taking the issue to court “for public health and against homophobia”.
Below is an example of one of the campaign's pictures. It reads: “With a lover, with a friend, with a stranger. Situations vary, and so do the protective measures. Find more info about sex between men on the site sexosafe.fr.”