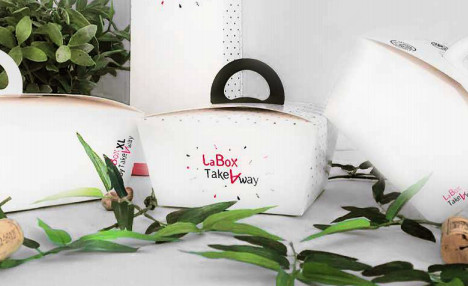 Photo: TakeAway France
TakeAway, the doggy bag company started by students in Lyon, has announced some exceptional figures to mark the 18 months since they launched.
Thanks to their product, they say restaurants have managed to save 82,800 kilogrammes of food from ending up in la poubelle.
Over the last year, sales have skyrocketed 300 percent, the company told Le Figaro newspaper, and it has sold 360,000 boxes to around 800 restaurants across the country.
The company's CEO Victor Marostegan said that the market “exploded” in 2016, allowing him to move on from just partnerships with restaurants and into the hotel industry.
That may have been helped by a change to the law in January 2016 that forced Restaurants  to provide doggy bags for customers who want to take their meal home.
The law applies to any restaurant that serves over 180 meals per day.
It's a move by the government to cut down on the 7 million tonnes of food wasted in France each year.
He added that the company, which also offers specialized bags for unfinished wine, is looking for an additional round of funding for €2.5 million as it seeks to move into the European market.
The success story is all the more impressive considering the French have long had a reputation for turning their noses up at the idea of taking home leftovers, which many deemed too American
Their aversion to saving scraps for home was put down to them being raised as children to finish your meal. But at the same time there was never deemed a need for doggy bags given the relatively small portion sizes of dinners in France (which Americans have been known to complain about).
Speaking to The Local previously, Laurent Calvayrac the founder of a French green packaging company, and a doggy bag proponent, said his countrymen are taught from an early age to eat everything on their plate.
“Like many French people I was raised with the instruction 'You will finish what I put on your plate'. So even now when I go out to eat, no matter the size of the portion, I finish everything even if I'm full,” he said.
“So doggy bags are simply not part of the French way of doing things.”
It seems, however, the doggy bag revolution is in full flow.
But the Union of Hotel Professions (UHP) recognised that leftovers was becoming an issue and that doggy bags had become necessary to combat the problem of food waste.
The union signed an agreement with TakeAway to help distribute the product as it sought to “generalize the use of doggy bags”.
And their help came at a crucial time, with the European Union saying restaurant left-overs represent 14 percent of the growing squander.
READ ALSO: Why the French just don't do doggy bags

AMERICANS
‘We’ll be on the first plane out’ – the Americans keen to visit France again
Url copied to clipboard!