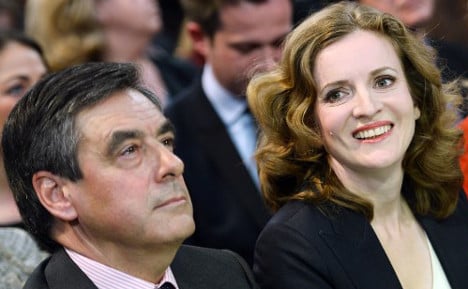 Nathalie Kosciusko-Morizet was a member of the government when Fillon was prime minister between 2007 and 2012.

Kosciusko-Morizet, known just as NKM in France, confirmed this week that Fillon told her in 2009: “You cannot be minister because you are pregnant.”

Her claim first emerged in a 2013 interview but was being revisited this week as Fillon and his conservative views on society came under the spotlight in the run up to Sunday’s crucial runoff vote.

Fillon is the favourite to win Sunday's vote, which would then make him the favourite to become president, but he has come under fire this week from women’s rights groups notably for his views around abortion, which he is openly against.

The view that he is too conservative and traditionalist, and perhaps not the man to uphold women’s rights, will only be reinforced by his previous comment to NKM, who after being defeated in last Sunday’s first round has now offered her support to Fillon's rival Alain Juppé.

NKM, however, tried to play down the controversy this week.

“It’s an old subject and I don’t want to bring it back to today’s debate,” she told France Info radio.

“This is a problem in French society as a whole,” NKM said. She then defended Fillon, whose own wife gave up a chance of a career in law to raise their five children.

“He told me he regretted it and I found that elegant,” said NKM.

For his part Fillon told Europe1 radio on Wednesday his version of the story.

“At the time Kosciusko-Morizet absolutely wanted to become a minister, a month after being named secretary of state.

“I told her she would not be a minister and would remain secretary of state and I said an awkward expression about her pregnancy. I then called her to apologise,” Fillon said.

“She has recognised my quality for being able to apologize for a bad joke.”

Fillon has however highlighted his work to protect women when he was PM, notably the laws that were passed to crack down on violence towards women and promote equality in board rooms.

He is also supported by the “Women with Fillon” movement, which has tried to promote him as the the candidate who has the interests of women at heart.