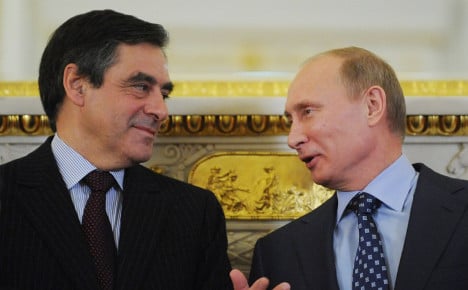 When Fillon met Putin. Photo: AFP
President Vladimir Putin on Wednesday praised as a “great professional” Francois Fillon, the winner of the first round of

In televised comments, Putin called the former French prime minister a “tough negotiator” and “undoubtedly a great professional” and a “very principled person”.

Fillon will go head-to-head with former premier Alain Juppe in a run-off Sunday that is widely expected to decide France's next leader after a prospective duel next year with far-right leader Marine Le Pen.

Answering a question from a Russian journalist, Putin said that “Mr Fillon in my opinion, is very different from politicians in today's world,” calling him “at first glance a closed, not a public person.”

“But despite his very European manner — in the best sense of the word — he is able to defend his point of view.”

Kremlin spokesman Dmitry Peskov said Tuesday that the two men had got to know each other when Putin served as prime minister between 2008 and 2012 and enjoyed “quite good relations”.

Peskov added that Russia was following the French presidential primaries with “great attention”.

Former prime minister Fillon, an admirer of Margaret Thatcher, won the first round of the French rightwing presidential primary on Sunday, knocking his former boss Nicolas Sarkozy out of the race and beating the favourite, fellow ex-premier Juppe.

Russian media this week portrayed Fillon as a “friend of Moscow” capable of mending relations that soured over Russia's 2014 annexation of Crimea and its support of a pro-Russian insurgency in eastern Ukraine.

However Fillon was given a different kind of attention over in Germany.

The Neue Presse saw a return to the Cold War era and the days of the communist German Democratic Republic, writing that “in Fillon's programme, the GDR still exists”.

“That would make Putin happy,” tweeted Reto Knobel in a social media reference also to Fillon's position of a new rapprochement with Moscow.

On page 59 of the policy booklet issued ahead of next May's election, a map of Europe shows a border splitting Germany into east and west as it did before reunification on November 10, 1990.