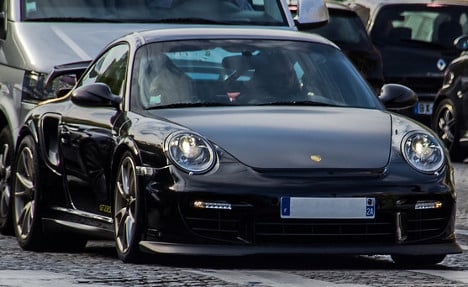 Photo: Ben/Flickr
A Parisian man, named as Olivier by Le Parisien newspaper, was out and about in a Porsche Carrera S on Thursday night in the chic sixth arrondissement.
Perhaps unable to find a car park (or perhaps not caring to try), the man left his €150,000 vehicle in a taxi stand before hitting the nightclubs.
When the morning came around, the man was reportedly unable (or unwilling) to drive home, so he took a cab and left his Porsche in the taxi rank with the hazard lights flashing.
The sight attracted the attention of the police, who are on high alert in the capital due to the heightened terrorist threat.
Officers called in the bomb squad, who decided they had sufficient reason to explode the front bonnet of the car at around midday on Friday.
The motorist arrived at the scene soon after and was told to take his car home, with no mention of whether the damage to his car would be covered.
“I shouldn't have parked it there,” the man admitted to Le Parisien newspaper, but added that he felt he had been wronged by the police.
“They contacted the leasing agency, then called me, and I explained the situation. I said sorry and said I would head there immediately. But obviously they didn't take this into account, because the bonnet was already exploded by the time I arrived.”
It's understood that the man is seeking legal action.