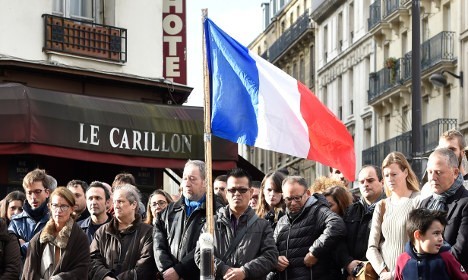 Mourners outside Le Carillon bar after the November 13th terror attacks in 2015. Photo: AFP
The criminal court at Versailles, southwest of Paris, found unemployed Laura Ouandjli, 24, guilty of fraud for claiming she was hurt when jihadists attacked the Carillon bar in the French capital.
Islamic State gunmen killed a total of 130 people in several locations around Paris on the night of November 13 last year, most of them at the Bataclan concert hall.
Ouandjli went to a police station more than a month after the attacks with her arm in a sling claiming she had been seriously wounded, presenting medical papers saying she had needed a skin graft, and had also lost her phone and bank card.
Police became suspicious when she said she had been injured in an explosion, as the Carillon was only attacked with automatic rifles, and other inconsistencies in her account emerged.
The doctor who had supposedly signed her medical certificate had never seen her, while a photo she produced of her “wounded” arm was taken from the internet.
As well as the one-year sentence, the court also ordered Ouandjli to pay one euro in symbolic damages to a fund for terrorism victims.