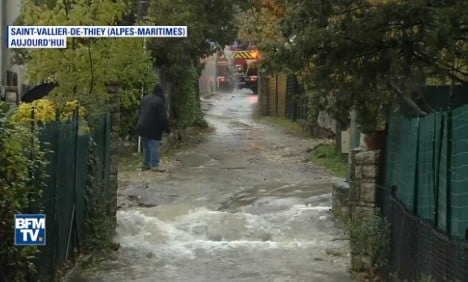 All have been placed on orange alert until at least Wednesday morning, with 12 of the 14 on alert for flooding.
An orange alert is the second highest warning level the agency issues, and urges the public to be “very vigilant”.
Residents have been warned to beware of falling trees, to keep off roofs, and to avoid secondary roadways.
The agency warned that residents could expect “significant damages” from the heavy rainfall, noting that in some areas it hasn't stopped raining for the last 24 hours.
Parts of the Cévennes mountain range have seen 20 mm of rain per hour on Tuesday morning, with Météo France saying that around 250 millimetres of rain has fallen since the storm began.
The agency predicted another 200 mm by Wednesday morning.
Météo France warned motorists to be vigilant in the face of reduced visibility on the roads, and told residents to be prepared for delays on both rail and road.
Those living in flood zones have been urged to take the usual precautions.