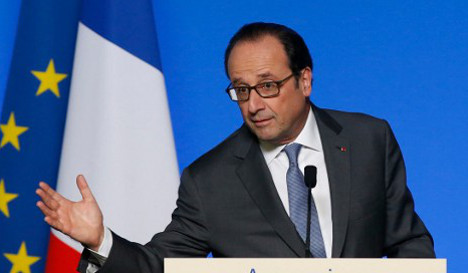 Photo: AFP
The documents dealt with planned air strikes in Syria in 2013, attacks which were never actually carried out, but details of which were published this August.
Hollande had handed the papers about the strikes to two journalists from French newspaper Le Monde who were in the process of writing a tell-all book about the president.
The journalists said the papers were the “veritable handbook of French intervention”, adding that they were marked “confidential”.
The investigation was requested by rightwing lawmaker Eric Ciotti, who called the leak “a flagrant and dangerous compromise to the necessary secrecy necessary for our security and our sovereignty.” France's Defence Minister Jean-Yves Le Drian has already brushed away news of the leak, noting that it was only information about “events from three years ago about an operation that never even took place”.
The book published by the journalists – called “Un president ne devrait pas dire ca…” (“A president shouldn't say that…”) – has already caused headaches for the president.
He was forced to apologize to after his comments upset senior lawyers and judges.
Hollande has recorded some of the lowest popularity ratings of a post-war president after four years in office overshadowed by stubbornly high unemployment and a series of devastating terror attacks.
Despite his unpopularity, the absence of an obvious Socialist alternative to Hollande leaves the way open for him to make a bid for a second term.
He has indicated he will make his decision on whether to stand in December.