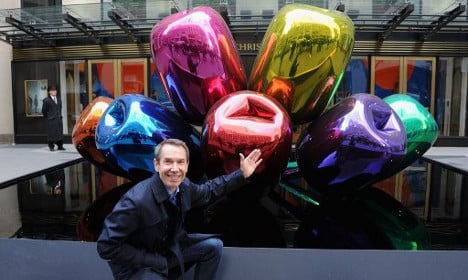 Artist Jeff Koons with a previous sculpture of Tulips in New York City. Photo: AFP
The monumental work, which has yet to be built, will be 10 metres (34 feet) high, and be made of bronze, stainless steel and aluminium.
The sculpture will represent a huge hand holding out a multicoloured bouquet of tulips, the contemporary artist said at the US embassy in Paris, a statement said (see an illustration below).
Once it is completed in 2017, it will be set up in front of the City of Paris Museum of Modern Art and the Palais de Tokyo building.
The sculpture will cost some €3 million ($3.2 million) to make. Financing will come from private donors in the United States and France. Koons said the sculpture was designed as an offering in memory of the victims and as a symbol of optimism, in an effort to help Paris overcome the tragedy that struck the French capital on November 13 last year.
In a string of coordinated attacks by Islamic State group jihadists that shocked the world, 130 people were killed that day.
Koons, who is known for toying with objects from popular culture, said the hand holding the tulips in his massive sculpture is intended to mimic the State of Liberty grasping its torch.
Paris is home to a several smaller replicas of the Statue of Liberty, including one on the Seine River, within sight of the Eiffel Tower.
“The fact that this great artist has decided to offer to the city of Paris… a monumental artwork is a symbol of generosity and sharing, and shows our capital's ties with the United States are unbreakable,” Paris Mayor Anne Hidalgo said.