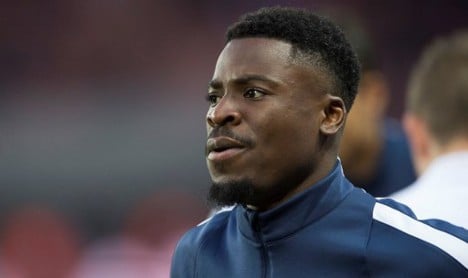 UK authorities appear to have banned the player due to his recent conviction for physically assaulting a police officer outside a Paris nightclub.

Nevertheless the French champions are less than happy.

A statement on PSG's website read: “Due to a sudden about-face by the British authorities, Serge Aurier has not been allowed to travel with Unai Emery’s squad for the clash away to Arsenal.

“Paris Saint-Germain is stunned by this incomprehensible situation that attacks the very integrity of the UEFA Champions League.”

Paris Saint-Germain defender Serge Aurier was sentenced to two months in prison and fined €2,100 in September for attacking a policeman outside a night club.

The 23-year-old Ivory Coast international, who has been regularly in trouble with his club, was alleged to have “insulted and hit a police officer” as he left a nightclub on the Champs Elysées on May 30th this year.

The player “elbowed” the policeman in the throat after being stopped in his car, according to reports.

But the player appealed the verdict and PSG were under the impression that the appeal meant he would be able to travel.

“Paris Saint-Germain had, in all transparency, informed the British authorities of this conviction, as well as Aurier’s appeal against this decision (and the legal suspension of the ruling) from the outset,” read the club's statement

“The club has argued several times that since the player has launched a legal appeal against the criminal ruling, he is therefore entitled to the presumption of innocence, as any other person exercising their right to appeal.

“Paris Saint-Germain strongly regrets that the presumption of innocence has not influenced Britain’s decision.

“The club also deplores that the final decision of the British authorities was only communicated at 14:00 CET on Tuesday, despite the club working for the last six days to find a solution to enable our player to travel with his teammates to London.

“Paris Saint-Germain considers this extremely tardive response as a flagrant lack of respect for the club, given that its player could have been training with the team just hours later at Emirates Stadium.”

A spokesman for the British Home Office said: “We reserve the right to refuse a visa to anyone who is convicted of criminal offences.

Aurier's PSG career has been dogged by controversy. Not only does he have the conviction for attacking a police officer but he was also suspended last year for calling then manager Laurent Blanc “a faggot” live on social media.

Aurier later admitted he had made a “stupid mistake” and apologized.