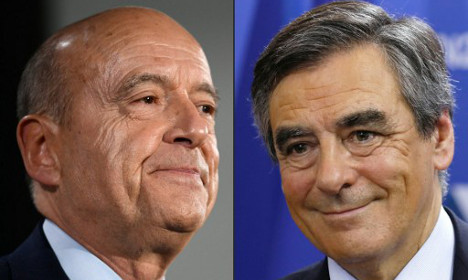 Juppe, left, and Fillon. Photo: AFP
By leap-frogging to first place in the first round of the primary, Fillon caused the elimination from the nominating contest of his former boss, ex-president Nicolas Sarkozy.
Following are profiles of the two men who will contest next Sunday's runoff:
Francois Fillon
The pro-business, reform-minded Fillon, 62, has campaigned as a compromise candidate, with more bite than the moderate Juppé but less punch than the pugnacious Sarkozy.
As premier under Sarkozy from 2007 to 2012, Fillon's unflappable demeanourmade him an antidote to his frenetic former boss.
He is best remembered for having warned about the dangers of running a big budget deficit a year before the 2008 eurozone debt crisis.
The eurozone's second-biggest economy was “bankrupt”, he declared — remarks he pointed to in campaigning as proof that he was a politician who pulls no punches.
Fillon, who became the youngest member of the French parliament at age 27 in 1981, went on to hold several ministerial portfolios under Jacques Chirac.

Fillon has promised far-reaching reforms to kickstart the moribund economy.
He has pledged to cut 600,000 civil service jobs and increase the working week from 35 to 39 hours.
On social issues, the father of five who is married to a Welsh woman tacked to the right of both Sarkozy and Juppé, vowing to amend a 2013 law on gay marriage to prevent adoptions by same-sex couples.
He has also announced plans to reduce immigration to a “strict minimum”.
Alain Juppé
Juppé, 71, has campaigned as a moderate and a sage who will unify a country divided by a deep economic malaise and a wave of jihadist attacks.
The man with the longest CV in French politics had stints as foreign and defence minister under his vanquished arch-rival Sarkozy.
Painting Sarkozy as a “prophet of doom”, Juppé has said he wants to be a “prophet of happiness”, risking ridicule in a country renowned for its pessimism.
“The French people need more than ever to unite to turn the page on a disastrous five years (under Socialist President Francois Hollande) … and to create a bulwark against” the far right National Front of Marine Le Pen, Juppé said after securing his second-place finish.

One of France's most popular politicians, the longtime mayor of Bordeaux was the frontrunner for the centre-right's nomination until a late surge by Fillon.
Tall, balding and considered a bit stiff by many, Juppé has reached out to the vast majority of Muslims who embrace France's secular values.
His messages have been aimed at the virtually rudderless left as well as the centre.
Juppé was the budget minister for two years in 1996-98 and foreign minister for the first time from 1993 to 1995, during France's involvement in wars in the former Yugoslavia.
He spent several years in the political wilderness after a party funding scandal in 2004, in which he was seen as the fall guy for his mentor Chirac.
Juppé was convicted and given a suspended jail sentence that forced him out of office for two years.
Resigning his posts as parliamentary deputy and Bordeaux mayor, Juppé handed the leadership of the centre-right UMP party — now the Republicans — to Sarkozy, who used it as his springboard for the presidency.
Juppé went to teach in Canada before returning to be re-elected mayor of Bordeaux in October 2006.
He has sought to shrug off a reputation as a detached technocrat two decades after his 1995 reform agenda sparked the largest protest movement France had seen since May 1968.
Juppé says he is a “changed” man and now more open to dialogue.
By the AFP's Adam Plowrights and Clare Byrne