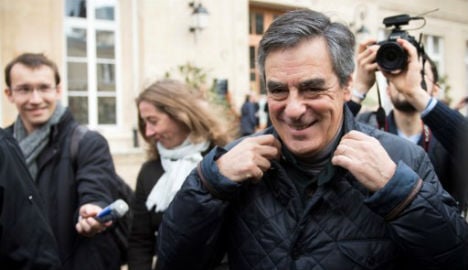 Former French prime minister Francois Fillon, the late challenger, voting on November 20. Photo: Martin Bureau/AFP
Former president Nicolas Sarkozy and ex-prime minister Alain Juppe are facing a late challenge from an outsider.
A last-minute surge in the opinion polls by Francois Fillon, who was prime minister under Sarkozy, showed he was in contention to grab one of the top two spots for next Sunday's runoff.
The Local's editor Ben McPartland was told of record turnout when he visited a Paris polling station on Sunday morning.

It is the first time the French right has held such a primary. The outcome is crucial because with the French left divided, the conservative candidate who emerges is tipped to take the presidency in May after beating far-right leader Marine Le Pen.
Some voters surveys at the end of campaigning put 62-year-old Fillon nearly level with Sarkozy, 61, and Juppe, the 71-year-old political veteran who had been the frontrunner for the past two months.
Juppe's strategy of playing the moderate against the fiery Sarkozy and the reform-minded Fillon appears to have backfired. The vote is not restricted to right-wing voters.
An unknown factor is how many left-leaning supporters will take part after paying two euros ($2.1) and signing a declaration that they subscribe to “the values of the centre and the right”.
One such Socialist voter, a sports teacher in his fifties who identified himself only as Eric, said Sunday he was voting “against Sarkozy”.
“I'm fed up of that guy, he thinks he is all-powerful and he has been involved in too many scandals. Juppe, despite everything else, is the opposite,” he told AFP as he cast his vote in the Paris suburb of Pantin.
In a final TV debate of the seven candidates on Thursday, Sarkozy angrily ducked a question about fresh claims that he received millions in funding from the late Libyan leader Moamer Kadhafi towards his 2007 campaign.
The case is one of several investigations to dog Sarkozy since he left office in 2012, losing to the Socialist Francois Hollande following what was dubbed a “bling-bling” presidency because of his flashy lifestyle.
The three leading candidates have similar programmes, underpinned by pledges to reinforce domestic security in a country still under a state of emergency following the jihadist attacks.
They also share a desire to reinforce European borders and reduce immigration, while tax cuts also loom large.
Ultimately, the choice will come down to style. Sarkozy has emphasised his tough-guy credentials, saying it makes him a better choice than the mild-mannered Juppe to safeguard France's position in an uncertain world following the election of Donald Trump in the United States.
Fillon, who is popular in the business world, has promised “radical” economic measures but is the most conservative of the three on social issues.
The nomination of the right-wing candidate on November 27 is expected to trigger an announcement from Hollande on whether he intends to bid for re-election despite the lowest popularity ratings of any post-war French
president.
On Wednesday, Hollande's former economy minister Emmanuel Macron, 38, announced he would stand as an independent. Polls Sunday close at 1800 GMT, with the first indication of the outcome