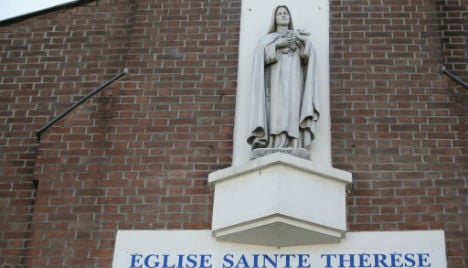 French authorities are investigating four more men for the Villejuif district church attack. Kenzo Tribouillard/AFP
The man, charged with association with a terrorist organisation, is suspected of having given the Algerian man who planned to assault a church south of Paris the material he needed for the attack.
The man's DNA has been found on a bullet-proof vest that was kept in the home of the would-be attacker, whose name is Sid Ahmed Ghlam. After he was charged, the man was released on bail pending further investigation.
Three other men, who were also arrested earlier this week in connection to the case, have also been released.
French authorities are currently investigating four more men in connection with the planned Villejuif district church attack. They too are accused of providing Ghlam with weapons and equipment to be used in the planned assault.
Ghlam, an Algerian IT student, was arrested in April 2015 on suspicion of killing a young woman who was found shot dead in the passenger seat of her car and of planning a church attack.
The attack failed after he shot himself in the leg by accident, leading police to uncover his alleged plot.
Prosecutors have found documents about Al-Qaeda and the Islamic State group at his home. They also found four Kalashnikov assault rifles, two handguns and bullet-proof vests in his room.
Investigators say he planned to carry out the church assault three months after jihadists attacked the Charlie Hebdo satirical magazine and a Jewish supermarket in Paris.
While 25-year-old Ghlam has admitted to investigators that he was ordered by jihadists operating on the Turkish-Syrian border to attack a church, he has denied any role in the young woman's death.
The woman's DNA has been found on the coat he was wearing, and weapons experts say the bullet that killed her was likely fired from his gun.
France has faced a string of deadly jihadist attacks since 2015, including the November 13 tragedy that saw Islamic State recruits armed with assault rifles and explosives strike a football match, Paris cafes and a concert hall.
Then on July 26 this year, attackers slit the throat of a priest in a hostage-taking at his church in the Normandy town of Saint-Etienne-du -Rouvray.