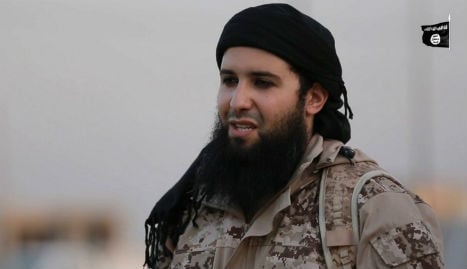 The boy was in touch with Rachid Kassim, one of ISIS's most wanted men. Photo: ISIS propaganda video
The 17-year-old boy was allegedly in touch with French-born jihadist Rachid Kassim, who is believed to have inspired an attack this year in which a senior French policeman and his partner were knifed to death and another in which an elderly priest's throat was cut.
The teenager, born in Belgium, was arrested this week in the western city of Rennes, where his family moved recently.
His name has appeared in an investigation into a 16-year-old girl arrested in August on suspicion of seeking to commit an act of terror in the name of jihad, based on a messages on Telegram — the encrypted messaging app popular among French radicals.
The boy, who called himself  Abou Omar in the exchanges, was also active on Telegram, in particular in the account run by Kassim.
Investigators suspect he may also have been planning an attack, sources close to the probe said. At least 15 people, some of them minors, have been arrested in France since last summer  for threatening attacks inspired by calls issued on Telegram by Kassim, 29, from IS-controlled areas of Iraq or Syria.
More than 200 people have been killed in attacks in France since 2015, including 130 who died in the November, 2015  Islamic State attacks in Paris.
Url copied to clipboard!