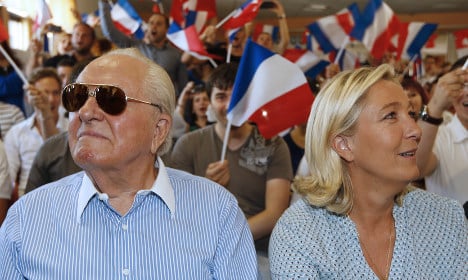 A French court on Thursday upheld the exclusion of Jean-Marie Le Pen from the far-right National Front (FN) by his daughter
Marine for repeated inflammatory remarks about the Holocaust.

FN leader Marine Le Pen, who has her eye on the French presidency in next year's elections, disavowed her 88-year-old father, accusing him of “political suicide”.

The court in the western Paris suburb of Nanterre upheld the FN's decision to strip him of his membership.

But in a small victory for the elder Le Pen it ruled he should be allowed to remain as the party's honorary president.

As such, the party is required to invite him to all its leadership meetings, failing which it faces a fine, the judges ruled.

The FN was also ordered to pay the party's founder 15,000 euros ($16,000) in damages for preventing him from carrying out his functions of honorary president over the past year.

Le Pen senior deeply resented being shown the door by Marine, who has been on a drive to purge the party of its anti-Semitic and racist image since taking over the reins in 2011.

He has accused his daughter of “abandoning” the party's grassroots, even though the FN continues to take a hard line on immigration, security and Islam.

But he took heart from Donald Trump's election in the US, seeing it as a sign Marine Le Pen could be France's next president.

“Today, the United States, tomorrow France. Bravo America!” he tweeted a day after the US vote.