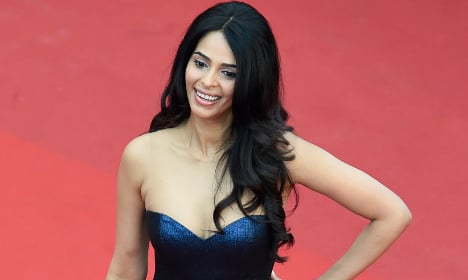 Model and actress Mallika Sherawat, whose real name is Reema Lamba, was attacked as she returned home with her partner at around 9.30pm on Friday November 11th.

As they arrived at their apartment on rue de la Faisanderie in the wealthy 16th arrondissement when they were jumped by three men.

Without saying a word, the attackers, who had their faces covered by scarves, sprayed tear gas in their face before punching them in the face, according to reports in Le Parisien newspaper.

The men then fled, leaving their two victims shocked but not seriously hurt.

The couple alerted the police with the motive for the attack appearing to be theft. Sherawat told police the attackers tried to steal her handbag during the attack.

Sherawat, aged 40, is a sex symbol in her home country, and has also made a name for by criticizing the lowly status of women in her country.

She blasted India for being “regressive for women” and “depressing”.

“India is a hypocritical society where women are really at the bottom as compared to men,” she told Variety magazine at this year’s Cannes Film Festival.

The attack on the Indian star comes just weeks after US reality star Kim Kardashian was robbed at gun point in a private residence in the city.

The robbery made headlines around the world and was seen as a blow for the image of Paris, which has suffered from high profile attacks on tourists in recent years.