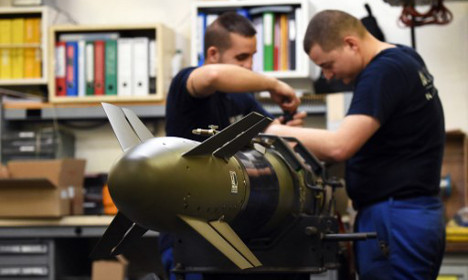 French navy soldiers work on missiles aboard the French Charles-de-Gaulle aircraft carrier. Photo: AFP
European countries have been slow to pool arms know-how, fearing an erosion of their sovereignty.
The deal announced at a Franco-British defence council in Paris goes much further than the usual arms cooperation programmes, with Franco-British missile manufacturer MBDA setting up four joint centres for research in missile technology — two on either side of the Channel.
The French defence ministry said the agreement paves the way for “real interdependence in a highly strategic sector and industrial streamlining between the two countries.”
“Each country depends on the other for a part of the skill set in these areas,” the ministry said.
Defence Minister Jean-Yves Le Drian, in a tweet, called the deal, which is expected to lead to cost savings, “an historic step”.
His British counterpart Michael Fallon said the deal aimed to “extend the boundaries of traditional interstate co-operation, to the advantage of both countries, including by increasing UK and French military capability and promoting competitiveness in exports.”
MBDA is Europe's biggest supplier of tactical missiles and the world's second-largest.
A defence source said the accord could serve as a template for boosting cross-Channel interdependency in other sectors.