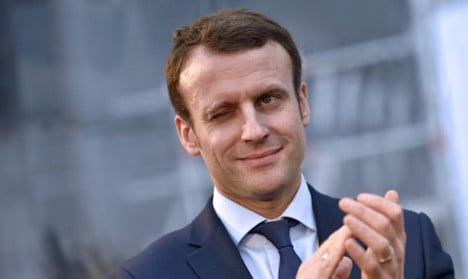 All photos: AFP
The former French economy minister told journalists on Wednesday that he would be running for president next year, and he made it clear he was ready to bring change.
“France has always been the country of progress, but it has fallen off the path,” Macron said. “I'm convinced our country wants to advance.”
And he has already revealed a few ways how he plans to reform the country with his “En Marche” (“On the Move”) centrist party.

Here are some of the key plans of his “compassionate liberalism”, according to an interview published in the Nouvel Obs newspaper. Although we can expect him to lay out more detailed policy proposals in the weeks ahead.
1. A change to the famed 35-hour week
“When we're young, 35 hours isn't enough. We want to work more, we want to learn our job,” said the 38-year-old former investment banker.
He added that employers may be put off hiring young people knowing that they will have to spend so much time learning the job.
“We need more flexibility,” he said, adding that working hours should reflect a person's age.
He pointed out that older workers often negotiate to work fewer hours, yet younger people don't negotiate to work more. 2. Scrap an all-encompassing retirement age
Picking a random age for retirement and sticking to it makes no sense, argues Macron.
“Some people want to retire at 60, others 65, others 67. You have to be able to adapt to individuals and situations,” he said.
He made no mention of any kind of minimum retirement age.
3. Unemployment benefits for the self-employed
With Macron in power, those who are self employed or freelance would have the right to unemployment benefits, he told the paper.
“We need to protect the hazards of working life that aren't covered right now, especially in small businesses and among the self employed,” he said.
4. Pay-outs for “burnt out” workers
The protege of President Francois Hollande said that those “on the edge of a burn out won't need to be afraid of quitting their jobs: they'll be entitled to allowances”.
Continuing to pay for people who quit would avoid having workers staying in jobs just because they think they have no other choice, he said. 5. More resources and autonomy for schools
Macron wants autonomy for primary schools and called for different teaching methods, more teachers per class, and better salaries for teachers.
He said schools need “a lot more resources and more autonomy. We need to stop sprinkling investments around and start to invest in another way.”
And in a bid for social diversity, Macron also called for “an absolute evolution” on how pupils are assigned to schools, suggesting that families from the suburbs should be allowed to send their children to school in the city centres if they wish.
6. On French identity and the question of Islam
Macron hasn't said too much on this subject that looks like defining the presidential campaign, but it's clear he is not of the same populist ilk of Nicolas Sarkozy and Marine Le Pen who are obsessed by what they see as the growing influence of Islam in France.
Macron is not obsessed by secularism in the way PM Manuel Valls is, and he believes the French are overly worried about the Anglo-Saxon model of multiculturalism and communitarianism.
“France is not a fixed, closed identity, relegated to a fantasized past,” Macron has said in the past.
Talking about Islam Macron said: “We have a choice: whether we want to fight a religion, or whether we want to build its place in the French nation, assuming it and helping it integrate.”