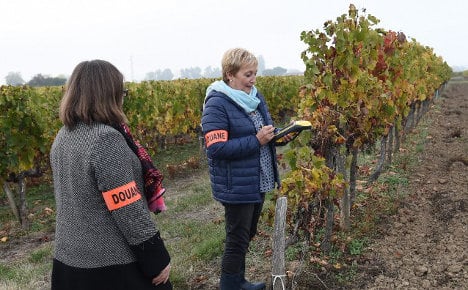 They carefully track the wine produced by France's tens of thousands of vineyards to protect the country's multi-billion euro (dollar) industry — and to make sure drinkers are getting what they are paying for.

Around the Bordeaux region, home to some of France's most prestigious — and expensive — wines, the eagle-eyed customs officials check vats, barrels, pallets, bottles and vines.

They draw up a meticulous inventory of stocks to ferret out both minor rule-bending and larger-scale fraud — detected once or twice a year on average, according to customs inspectors.

“Customs service, we've come to do a stock inspection,” declares Bertrand Bernard, head of the customs' five- wine service in the Libourne area, as he arrives at the Cave de Lugon cooperative.

Lugon, a village on the right bank of the Dordogne river, lies around 25 kilometres (15 miles) northeast of Bordeaux city.

Jean-Marie Esteve, who has been a “maitre de chai” or master winemaker since 1984, is happy to cooperate.

“It doesn't make me particularly nervous,” Esteve tells AFP. “There's always a difference between what is declared and what is measured. But over the 40,000 to 45,000 hectolitres we have, it's never more than a few hectolitres” — well within the permitted limits.

Jean-Luc Caboy, the head of the cooperative, which includes 110 winemakers working around 750 hectares (1,800 acres) of vines, says they check in with customs officials regularly “to make sure we are okay in terms of the regulations”. The inspection begins with the imposing concrete vats that date back to the creation of the cooperative in 1937, where heady aromas float in the air.

Opening a small tap, Esteve pours a little red wine into a glass and hands it to Christian Lafon, the main customs inspector.

He checks the colour, swills and then sniffs the wine, before pouring it into a bucket, satisfied.

“We're checking to see that it is really wine from the last vintage and not a blend… If there is any doubt we take a sample away for analysis,” he says.

But at Lugon all is well.

The inspection continues on the upper floor, where Lafon, torch in hand, looks under the cover of each vat.

“That's full, no problem,” he tells his two colleagues, who are scrupulously noting the volume of wine measured in each vat, one on computer, one on paper.

In a warehouse next door, he counts barrels of wine, knocking on each one to make sure it is full, before moving on to count bottles stored on pallets, almost one by one — because every litre counts in the customs inventory.

“We compare the volumes declared by the cave with what we find when we do the inventory. We subtract what has been taken out and see what remains. If it's under, it's often due to losses during the winemaking process (evaporation, decanting, etc). If it's over, it could be a miscounting during the harvest,” Lafon said.

“There can be a few differences, often mistakes. Beyond that, it can reveal a system of organised fraud.” It was this careful accounting that revealed the “moon wine fraud”, which also saw winemaker Marret hit with a fine of eight million euros ($8.9 million).

More than a dozen others were convicted along with Marret, including a wine merchant, two brokers and three other producers.

“It all started with inconsistencies between the stocks checked on the ground and the documents filed by the chateaus,” says Jeff Omari, regional deputy director of customs in Bordeaux.

Customs officers then dissected the movement of wine around the vineyards in question and analysed samples “to work up through the chain of fraud and all the players involved: winemakers, brokers, transporters, and so on — nearly two years of investigation in total,” Omari said.

France is the world's biggest wine exporter by value, accounting for 29 percent of the market at 8.2 billion euros in 2015, and top Bordeaux labels such as Chateau Petrus sell for upwards of 1,000 euros a bottle.

But the country has been hit by several fraud scandals in recent years.

In 2010, 12 French winemakers and dealers were convicted of sellingmillions of bottles of fake Pinot Noir to the US firm E&J Gallo.