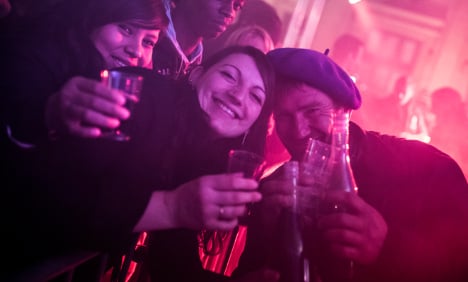 1. Around 15 percent of the French population are obese.

This is what a 2012 state sponsored study by ObEpi-Roche revealed. This fact may come as surprise to many given the French have long been known for having some of the world's healthiest cuisine and thinnest waistlines. But it appears their recently acquired love of fast-food may be having an adverse effect. The same study found that the French, on average, have put on more than three kilos since 1997. 2.The French eat 10 tonnes of pizzas per year.

A seemingly incredible stat that might explain the previous one on rising levels of obesity. At 10 tonnes a year that means the French eat more pizzas than the Italians (9 tonnes) and are second only to the Americans (12) in the global pizza munching table. Find that hard to believe? 3. French women are having more sex than ever.

French men have the reputation for having all the sex but French women have been catching up recently. A 2008 study revealed they are having their first sexual encounter aged 17, down from aged 20 in the mid-1990s. French women on average have five lovers in the course of their lives, instead of the four, 20 years ago. And 90 percent of women aged over 50 say they remain sexually active, up from 50 percent in 1970. Sound true to you?

4. About 27 people kill themselves everyday in France.

This stat gives France one of the highest suicide rates in Europe, behind only Finland, Belgium and certain Eastern European countries. That may seem strange for a country renowned for its quality of life but mental health experts have said they believe the high rate is due in part to a lack of resources for people suffering from psychological illness.

5. French teens have been smoking and drinking more since a 2009 law that raised the minimum age for alcohol and tobacco sales.

It appears government efforts to prevent the invasion of “le binge drinking” among French teens is not working. The rate is highest among 16 and 17-year-olds. France raised the age limit in 2009 in a bid to tackle the increased trend of what is known in French as “la beuverie express” which up until a few years ago had been an Anglo phenomenon. 6. Almost two thirds of French declare themselves as Catholic.

France has a long tradition of laicité – the non-interference of religion in state matters, but the Catholic church remains a powerful institution in society and it can still count on a high number of Gallic followers. A 2010 poll revealed 64 percent of French people considered themselves Catholic, although that is down from 81 percent in 1981.

If that sounds incredible then the fact that only 1,000 tonnes come from France's 300 snail farms is even more surprising. That means over 95 percent of the country’s edible gastropods are imported. One of the problems with home grown French snails is that some varieties refuse to breed in captivity.

8. One in two French men cheat on their partners.

This stat, which will worry expats with French boyfriends, is in line with the stereotype of the unfaithful Frenchman. However it's worth noting the same survey carried out this year revealed that French ladies weren’t much better either when it came to being faithful. About a third of them cheated on their partner. 9. On average the French drink the equivalent of 13.7 litres of pure alcohol each year.

That total is the same as drinking well over 500 pints of beer that contain five percent alcohol. It may seem like a lot, but it represents a significant drop from the early 1960s when the French consumed the equivalent of 25 litres of pure alcohol per year. France’s thirst puts it only behind the hard drinking United Kingdom and even harder drinking Russia.

10. In 2011 more French households had a colour TV than those that had a refrigerator.

The fact that 97.4 percent of homes with a TV, compared to 89 percent with a fridge, may help the confused expat understand why French supermarkets have cartons of milk sitting on the shelf and not in the refrigerated section along with other dairy products. French dry sausage, saucisson, also sits on the self as though it were a can of peas.