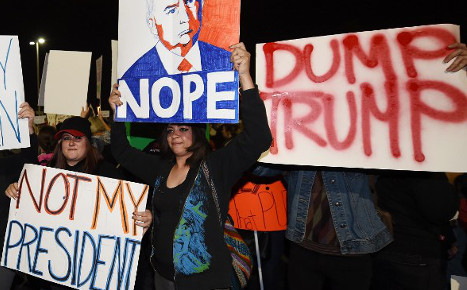 Parisians unhappy with the election of Donald Trump as president of the United States of America are to march through the French capital on Saturday.

Marchers will meet at the Ecole Militaire at 1pm and at 2pm they will set off towards the L'Esplanade Trocadero.

The march has been organised on Facebook by the group Paris Against Trump. “The results of the United States presidential election have outraged people around the globe,” reads their message on Facebook.

“In response to Donald Trump's victory, citizens everywhere must unite to stand up against his discourse of hate and xenophobia, his fear-mongering, and the dangerous policies he plans to enact.

“Given the influence and powerful position of the United States on the world's geopolitical stage, Trump is a threat not only to people in the U.S., but to people throughout the world.

“Trump's victory serves as encouragement to dangerous demagogues everywhere. This is why we are calling on Americans, Parisians and citizens from all countries to join this protest.

“In the face of an impending Trump presidency, we cannot be complacent. We must roll up our sleeves and mobilize.”

By Wednesday almost 1,000 people had indicated they would be attending the protest.