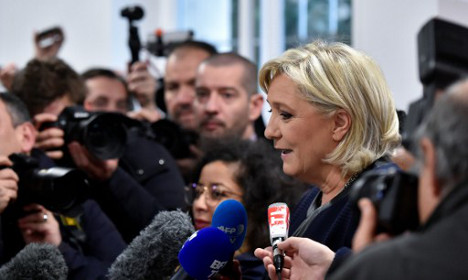 The proximity of the palace to the new headquarters – located at 262 Rue du Faubourg Saint-Honoré -would “make the move easier in May,” Le Pen's campaign treasurer told Le Figaro newspaper. Le Pen also revealed her new campaign poster, which features a horizontal blue rose and the text: Marine President (see picture below). The rose's stem is totally absent of thorns, with Le Pen saying “we left the thorns for the Socialists”.

The party's new slogan is “In the name of the people”.

There was no mention of the party name “National Front”, and the party's old logo of a flame was nowhere to be seen. The rose can be seen behind Le Pen above. Photo: AFP
The move is just the latest effort from Le Pen to soften the image of her party and to distance it from her father Jean-Marine Le Pen.
Le Pen's presidency bid is being taken seriously after Donald Trump's victory in the US, and she is no longer just a side show in French politics.
Marine Le Pen, among France's most popular politicians, is forecast by pollsters to win or come second in the first round of French presidential elections in April next year.
She would then face a second-round run-off against a rival candidate, most likely from the centre-right, which she is expected to lose, according to polls.
Le Pen has worked hard to try to make the FN more acceptable to mainstream voters, shedding its overtly anti-Semitic and racist image under the party's former leader, her father Jean-Marie.
Her platform remains focused on restricting immigration, fighting against Islamic fundamentalism and withdrawing France from the European Union.
She welcomed Trump's stunning victory last week, saying his rise signalled the “building of a new world” and a blow against “unfettered globalisation” and the world elite.