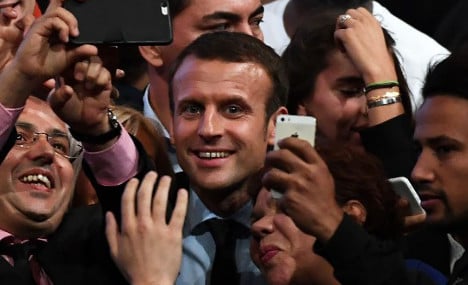 Emmanuel Macron was unheard of when he was the surprise nomination for Economy Minister two years ago, but his announcement on Wednesday that he was “ready” to run to be the president of France shows just how big his stock has grown.

Macron made his announcement in front of 200 journalists from France and around the world. When he walked on stage it was like a scene out of the Cannes Film Festival with the flash bulbs and the shouts from photographers from him to face their way.

Macron's move may be a “immense gamble” as TV commentator put it, but Wednesday at least showed he is now a box office politician in France who can demand attention.

But can he really replace his former boss and become president of France in just nine months time?

“On paper, his ambition is pure madness. His chances of winning are miniscule,” wrote Cecile Cornudet of Les Echos newspaper previously.

Macron himself must think his chances of winning are not that minuscule.

Despite his popularity ratings among the public being at 41 percent, far higher than those of his two bosses Hollande and PM Manuel Valls, Macron faces huge, seemingly insurmountable challenges if he wants to get his hands on the keys to the Elysée Palace.

He has no party?

First of all he doesn’t have a political party behind him. France does not have a history of politicians succeeding who are neither of the left nor the right.

But he believes things can change.

“The challenge is not to unite the left or the right but the French people,” said Macron.

While that may make him popular to some voters who are sick of the mainstream, it certainly makes it harder for Macron to build up a network of support.

Macron has positioned himself as progressive who wants to take on conservatives and aims to unite all those from the left or the right who seek the same kind of reforms as he does – a further liberalzation and loosening of the French economy.

Gerard Collomb, the Socialist party senator and mayor of Lyon is Macron’s most high profile outspoken supporter. But Macron will need more than him to help convince voters he is the real deal.

Speaking on BFM TV on Wednesday Collomb claimed that around 50 MPs from the left and the right are ready to get behind Macron. Does he have enough supporters?

It’s not just political heavyweights Macron needs. He needs people on the ground. Hordes of activists or “members” as he prefers to call them, who can organise and attend rallies, post leaflets through doors and basically take the Macron message to the people.

Macron’s political movement “En Marche” (On the Move) has already pulled in some 60,000 followers, a small number of whom packed into a Paris meeting hall earlier this year where Macron promised to “lead them to victory in 2017”.

According to Le Figaro newspaper, among those 60,000 “sympathizers” around 15,000 are ready to volunteer on the ground and 500 or so are willing to be coordinators in around 20 towns across France.

That all sounds good but is a long way of the 240,000 activists that Nicolas Sarkozy’s Les Republicains party can call on.

But he does have money

It’s not just the followers Macron needs. He also need cash, especially if as expected he will go it alone rather than take his chances through the Socialist party primary.

There were recent reports in the French press that that Macron was raising funds for a presidential election war chest.

Paris Match reported that Macron raised nearly €12.75 million ($14.5 million) during a trip to London to “fund a campaign if he decides to run”.

The former minister denied the report.

Again Le Figaro reported that Macron had managed to convince a few thousand donors to stump up around one million euros. But candidates who qualify for the second round of voting are allowed to splash some €22 million on their campaign.

Macron might need to pop back to London a few more times if he really has designs on the Elysée.

Who will vote for him? Perhaps readers of the glossy magazines who have carried recent photo spreads of Macron and his wife, who given that's she's his former school teacher, gives the couple some extra intrigue.

But arguably the most difficult task for Macron will be to come up with a programme that will convince voters.

He has been open about young people being able to work longer than the traditional 35 hours a week and people to be able to retire when they want.

He may have been part of a Socialist government but he is loathed by those on the hard line left for being too cosy with big business.

Embarrassingly for the government leftist rebel MPs refused to vote in favour of Macron's reform package which liberalised certain section of the economy and resulted in among other things, more Sunday shopping.

Macron's hope will be to convince enough centre-right voters, students, young professionals and the middle classes, to take a gamble on him.

But although the right wing presidential candidates Alain Juppé and Nicolas Sarkozy are old-timers they remain popular figures. While Sarkozy may have returned wearing the clothes of the far right, Juppé is moderate enough to leave little room for Macron.

Marine Le Pen also stands in Macron's way. The far right leader has built her image on being the alternative candidate to the same “broken political system” Macron referred to in an interview on Tuesday.

Her support has ballooned in recent years as she scoops up former left wing and right wing voters who have grown tired with the likes of Hollande and Sarkozy proving powerless at fixing France's ills.

Macron would find it tough to convince these disillusioned voters, who appear to want a return to a France that no longer exists rather than a new, modernized and streamlined France that a young financier like the forward-thinking ex-financier would offer. But what does he stand for?

And importantly while the former may be able to convince French voters of his economic prowess, it looks increasingly likely that the 2017 election will be decided on matters of security and French identity. Home turf for the likes of Le Pen and Sarkozy. Macron has not made it clear whether or not he minds the sight of a woman in a burqini on a French beach.

Macron has suggested he is in favour of multi-culturalism, something that might not go down well in a fractured, insecure France right now.

But his apparently slim chances may all depend on his former boss François Hollande.

If Hollande decides to run for president, there will be little room left for Macron.

But there is a theory that Hollande, knowing he has no chance of victory, has already decided not to run and will stand aside for the young upstart Macron to try to pull off his “crazy gamble”.

Pollster Jérôme Fourquet from Ifop does not buy that theory and believes Macron's strategy all along has been to put pressure on Hollande not to run.

Fourquet told The Local that Macron's rise has been impressive but not enough to earn the top job.

“He has already achieved enormous success. He can cause damage in his old camp for Hollande but he will not  have enough support to become king himself,” Fourquet said.

“The challenge is Herculean wrote Cecile Cornudet in Les Echos. “Even if in just one day Emmanuel Macron showed he was right on one point. The wait for “something else” is immense.”

Macron has less than six months to be that “something else”. Would you bet against a banker?