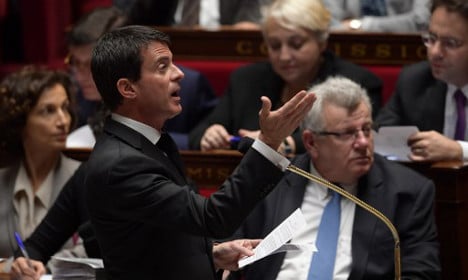 Photo: AFP
Valls confirmed on Tuesday that he would be asking for another extension to the state of emergency as France gears up for presidential elections.
“France has to be clear about the threat, and that's why we're proposing to Parliament to extend the state of emergency,” he said.
The prime minister hinted that an extension would be on the cards during a weekend interview with BBC television.
“It is difficult today to end the state of emergency,” Valls said on Sunday, as France marked exactly one year since the November 13, 2015 jihadist attacks that left 130 people dead.
“Especially since we are going to begin a presidential campaign in a few weeks with meetings, with public gatherings. So we must also protect our democracy,” Valls added.
“Besides, this state of emergency device allows us to make arrests, administrative checks which are effective… So yes, we are probably going to live a few months more with this state of emergency.”
The state of emergency was introduced on the night of the Paris attacks and extended for six months in late July.
While stressing he remained “very cautious”, Valls said the risk of similar coordinated attacks appeared to have diminished.
“But we may face attacks of the kind that we saw in Nice,” he said, referring to the July attack in the Riviera resort in which a 31-year-old Tunisian mowed down 86 people in a truck.
“That's to say some individuals who are driven directly by the internet, by social networks, by the Islamic Sate group, without having to go to Syria or Iraq.”

From the government's point of view, the state of emergency has proved effective. Here's what it has resulted in:

While the government can boast about its figures, rights groups like the International Federation of Human Rights say the ongoing state of emergency has been damaging.

“Fundamental rights have been abused and there has been an impact on the Muslims in France, who are at a high risk of stigmatization and having their social links broken down,” say the FIDH.