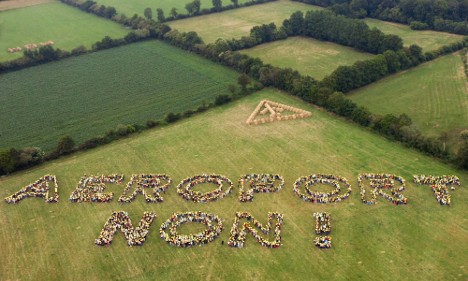 Socialist Prime Minister Manuel Valls hailed the ruling following years of legal battles and sometimes violent protests over the plan, saying it “proves once more that the project is perfectly legal and complies with current regulations.”

But an umbrella grouping of activists vowed that they would “not allow any work or evictions to begin” for the Notre-Dame-des-Landes airport, which will be a second facility serving the western city of Nantes.

Yannick Jadot, a former Greenpeace activist who is the green party EELV's candidate in France's presidential elections next year, slammed the ruling, calling the project “absurd and destructive”.

Between 200 and 300 activists are camped at the site some 20 kilometres (12 miles) north of Nantes in a protest that dates to 1965 when the project, now projected to cost nearly one billion euros (dollars), was first mooted.

It was approved in 1970, but mothballed because of the oil crisis.

Since Socialist prime minister Lionel Jospin revived the plan in 2000, it has been the subject of heated public debate and dozens of legal challenges.

In 2009, anti-capitalist activists from across Europe joined the dairy farmers and residents occupying the site. There have been several violent standoffs as riot police tried to dislodge the squatters, some of them living in treehouses.

In 2012 then prime minister and current Foreign Minister Jean-Marc Ayrault — who hails from Nantes — set up a “dialogue committee” that found in favour of the project while strengthening environmental safeguards.

Then in June this year, voters in the Loire-Atlantique region approved the project in a referendum, the “Yes” vote winning with 55 percent.

“The people have voted, justice has ruled: work begins now!” Philippe Grosvalet, the region's Socialist president, said in a statement.

The court said planned steps to compensate for the environmental impact of the project were adequate, and that the alternative of overhauling an existing airport serving the region, Nantes-Atlantique, was not viable.

“It's a huge disappointment,” said local activist Francoise Verchere, the former left-wing mayor of Bouguenais, where the Nantes-Atlantique airport is located.

Opponents of the airport can still lodge an appeal to France's highest court, the Conseil d'Etat, but one of their lawyers, Thomas Dubreuil, said it would be based “only on legal issues” that would not derail the project.

Julien Durand, spokesman for the largest citizens' group opposing the airport, said vowed “we will multiply our resistance”, wishing “good luck” to Valls.