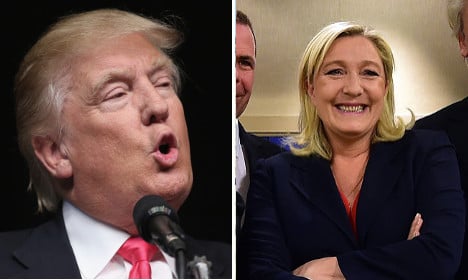 A leader of France's far-right National Front said Tuesday that she welcomed reported plans by ultra-conservative US website Breitbart News to expand in France and support the party's presidential campaign.

Breitbart News, whose anti-elite, anti-immigration agenda has made it popular with white supremacists, is credited with helping propel Donald Trump to the White House.

Trump named the executive chairman of the platform, Steve Bannon, as his chief strategist at the weekend.

Marion Marechal-Le Pen, whose aunt Marine is the leader of the National Front (FN), told AFP on Tuesday that she would be happy to work with Breitbart if they came to France.

“All alternative media are generally positive. Donald Trump is the demonstration of that… they're among the useful tools,” the 26-year-old parliamentarian told AFP on a visit to Moscow.

Bannon called Marechal-Le Pen a “rising star” in an interview with French website radio-londres.fr in July and said Breitbart was hoping to open a Paris bureau, or start a French version.

The site's editor-in-chief, 30-year-old Alexander Marlow, told The New York Times that the site's expansion was linked to elections next year in Germany and France, where Breitbart intends to support Marine Le Pen.

The site launched in Britain in 2013 after seeing a “business opportunity” in the campaign to leave the European Union.

During the Brexit campaign Breitbart's te site's London editor took a brief leave of absence from the site to advise Nigel Farage, the leader of the Brexit movement.

Marine Le Pen, among France's most popular politicians, is forecast by pollsters to win or come second in the first round of French presidential elections in April next year.

She would then face a second-round run-off against a rival candidate, most likely from the centre-right, which she is expected to lose, according to polls.

Le Pen has worked hard to try to make the FN more acceptable to mainstream voters, shedding its overtly anti-Semitic and racist image under the party's former leader, her father Jean-Marie.

Her platform remains focused on restricting immigration, fighting against Islamic fundamentalism and withdrawing France from the European Union.

She welcomed Trump's stunning victory last week, saying his rise signalled the “building of a new world” and a blow against “unfettered globalisation” and the world elite.

Marechal-Le Pen told AFP on Tuesday that there had been “some small contacts for some time” between the FN and the Trump campaign.