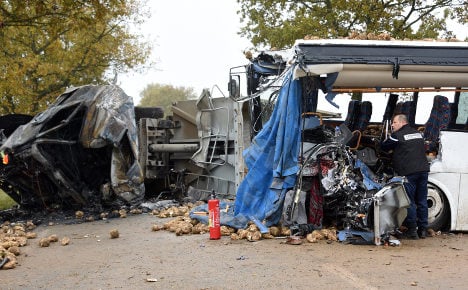 Photo: AFP
A woman driving a school bus in northern France was killed on Monday morning when her vehicle crashed head on into a truck, French authorities have confirmed.
Three others are understood to have sustained serious injuries, two of them including a 15-year-old schoolboy were in a “life threatening” condition, according to the local authority chief in Pas-de-Calais.
The accident occurred at around 7.45am on the N25 in the town of Bavincourt, not far from Arras.
Another ten passengers received minor injures, rescue services said.
The children on the bus were in their early teens, according to reports. Photo: GoogleMaps
France has been under pressure to reduce road deaths after figures have increased for three years in a row.
Le Figaro newspaper reported on Friday that for the first ten months of 2016, there has been a 0.8 percent increase in the death toll, with 2,882 dead in total.
Despite the increasing death tolls, France has seen a drastic reduction in road fatalities over the decades. After a peak of over 18,000 deaths in 1972, the figures have steadily dropped in the vast majority of years, until 2013.
The government aims to have fewer than 2,000 deaths before 2020. France announced last year that it would install 10,000 dummy speed cameras – and 500 real ones – to keep drivers to the limit, among other measures.

France has suffered several high profile school bus crashes this year, with six pupils killed in February after a truck's side panel sliced through the side of their school bus.
Just two days earlier, two pupils were killed in eastern France when a school bus careered off a snow-covered road.