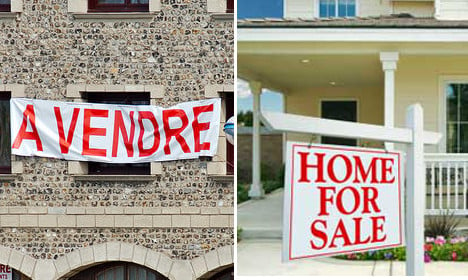 Photos: Frédéric Bisson/Mark Moz/Flickr
The study, based on information from Eurostat, was published on Monday by mortgage specialists Crédit Foncier.
It compared eight European countries: France, the UK, Germany, the Netherlands, Poland, Portugal, Spain and Italy (which makes up 75 percent of Europe's population).
Here are some of the key findings:
How many are homeowners?
In France and the UK some 65 percent of households are homeowners, which compares to 84 percent in Poland, 79 percent in Spain and 73 percent in Italy. At 54 percent, Germany had the lowest percentage of households that were homeowners.
Less salary spent on paying for home
The study found that in France, people tend to spend a smaller percentage of their income on their homes.
In fact, the typical French person spends 18.3 percent of their income on housing, compared to 25.1 percent in the UK.
Only the Italians spend less (17.1 percent of income), while the top spenders were in the Netherlands, where a whopping 29.4 percent of people's salaries goes directly into their living arrangements.
France sees only small jump in house prices
Between 2006 and 2015 house prices in France increased only 2 percent on average. That compares to a staggering 30 percent jump in the UK and a 21 percent rise in Germany.
In the Netherlands, Italy and Spain, house prices all fell during this period. (Vic Burton/ Flickr)
Big, empty homes
Homes are relatively spacious in France, according to the study. This might not sound right to anyone living in Paris, but the average home in France is 102 metres squared and has just 2.3 people inside.
This compares to the UK's 2.3 people per 76 sqm home (the smallest homes in Europe), or Poland's 2.7 people per 85 sqm.
The biggest homes belonged to the Dutch (at 119 sqm on average) and the Portuguese at 112 m2. (AFP)
Less time to pay off mortgage
The stats revealed that the French generally borrowed over the short term compared to some of their neighbours, facing an average mortgage time of 19 years. The Spanish borrowed over 23 years, while it was 25 in Germany and 30 in the Netherlands.
Average interest rates for mortgages stood at 2.1 percent in France, compared to 2.6 percent in the UK. Rates in Germany were the lowest (2 percent) and the highest in Poland (3.4 percent).
The average mortgage left to pay back stands at €47,096 in France, just over the European average of €41,099, but streets ahead of the UK, where homeowners have €82,525 still to pay back on average and the Netherlands where the figure is €81,433. In Germany homeowners had an average of €51,793 still to pay off.
However the Poles have an average mortgage of €7,567 for the Italians it was €19,216. (AFP)
Comparatively low jump in construction costs
The study also noted that while the French have seen construction costs rise by 18 percent over the last decade or so, the European average is far worse at 27 percent. The Italians and the Brits, meanwhile, have suffered respective hikes of 42 percent and 41 percent.
Young and rural
The study noted that the French typically leave home at the age of 24, two years shy of the European average.
This was the same case for the Dutch, the English, and the Germans. Italians were the oldest to fly the coop at 30 years on average.
And while 72 percent of Europeans live in urban areas, the number is just 66 percent in France (compared to 87 percent in the UK).
France also has one of the least densely populated countries with 120 inhabitants per square kilometre compared to 26 in the UK and 227 in Germany. The Netherlands was the most densely populated country included in the study – 405 inhabitants per square kilometre.
And despite the impression some may get that everyone in France lives in an apartment, in fact 69 percent of households are in houses, compared to 85 percent in the UK.

WILDFIRES
How to protect your French property from wildfires
Url copied to clipboard!