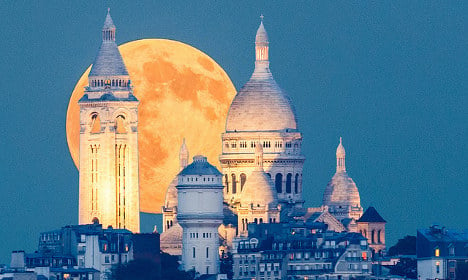 Photo: Loïc Lagarde/Flickr
So what's actually happening?
The moon is full at the same time that it's very close to the earth, a phenomenon known as a supermoon.
There's one every 14 months or so.
That doesn't sound too special…
Oh, but this one is. Nasa said it will be the closest supermoon to Earth in 68 years and that we won't get anything similar until 2034.
It only happens when the Moon is full at the same time as, or very near, perigee — its closest point to Earth on an elliptical, monthly orbit.
“On November 14, it becomes full within about two hours of perigee — arguably making it an extra-super Moon,” Nasa says on its website.
The full moon will be just 350,000 kilometres away, promising some dramatic photos and excellent surfing opportunities.
So when can I see it over France?
Those in France can expect the moon to be at its fullest at 2.52pm (weather permitting, and more on this later), but the best time to catch it (of course) is when it gets dark.
The Paris Observatory has suggested any time after 6.30pm will be ideal viewing time, though it should be visible right up until Tuesday morning.
What can I expect?
The full Moon's relative proximity should make it appear about 14 percent bigger and 30 percent brighter than at its furthest orbit point, according to the Irish Astronomical Association (IAA).
“Because the Earth/Moon system will be getting quite close to the time of year when it is closest to the Sun (January 4th, 2017), the Moon will be receiving more sunlight than average, also boosting its apparent brightness.” Photo: Hip1/Flickr
Any tips for a magic photo?
Yes. Don't wait for the moon to be high in the sky, catch it while it's near the horizon.
“When you look at the Moon when it's rising, there is this optical illusion where it looks bigger,” astronomer Mark Bailey, emeritus director of the Armagh Observatory in Northern Ireland, told AFP.
Lying low, as a backdrop to trees or buildings for context, our satellite appears larger to the human eye despite being the same size the whole night.
Try and include a well-known landmark in your picture, stand back, and use a strong zoom to magnify both the landmark and the moon.
The golden question: Will it be cloudy?
We hate to break it to you, but a lot of France will be covered in cloud tonight. National weather agency Météo France has forecast clouds for most of the country for the entire night.
Those on the Riviera (as usual) can expect better weather, and a better chance of seeing the moon, and are the only ones who can expect a cloud-free night.
Everywhere else, including Paris, can expect some serious cloud cover. And to add insult to injury, it will even be raining in much of the north.

But don't let the forecasts get you down – and be sure to bring your cameras if you're out and about tonight. And be sure to send us in your best snaps for us to share via our Facebook page.