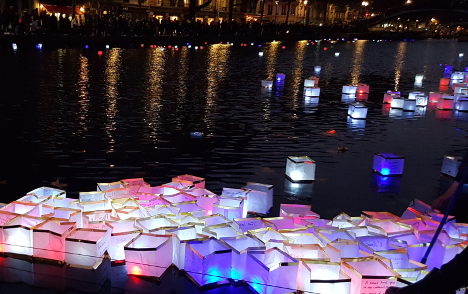 The City of Light lived up to its name on Sunday night as Parisians remembered the 130 victims of last year's terror attacks in the city.

Hundreds of lanterns, that glowed in the colours of the French flag, were placed on the Canal Saint Martin in the 10th arrondissement, a stone's throw from the bars where several revellers were gunned down as they enjoyed a night out.

Hundreds of Lanterns are set afloat on the Canal Saint Martin in Paris in a moving homage to victims of last year's attacks #13November pic.twitter.com/oAQbGkN0mh

Solidarity, never forget, peace, we miss you, love, Paris forever…. some of the messages written on the lanterns at Canal Saint Martin… pic.twitter.com/2dGkwT5nVk Candles were placed in windows of houses and buildings across the country, after a request from one of the victim's associations.

Thousands of hearts were released into the air in Place de la Republique, the square that became a makeshift shrine to the victims in the days after the attacks.

At the Canal Saint Martin, a young man named Alexandre laid four lanterns in the water in memory of three of his friends who died in the Bataclan, Mathieu, Marc and Thomas and a fourth named Sarah, who was seriously injured.

“The anniversary brings about a mix of emotions. It's been hard to deal with. But there is hope despite what happened,” he told The Local.

“This is an opportunity for us to show that Paris will not lower our heads,” he said.

Many other people who took part in the ceremony were from the neighbourhood which has been left deeply scarred by what happened.

One woman named Pierina said: “We need to be here all together for all those who died.”

Messages written on lanterns read: “solidarity”, “we will never forget you”, “Paris resist!”, “we miss you”. Some messages bore the names of those who had died.

'Paris don't give in!', 'Paris my love' some of the messages on the lanterns to be set afloat on the Canal Saint Martin… #13November pic.twitter.com/QPn6cWXpKC

15 candles line bar at the #Carillon in memory of the 15 victims 'The day we forget them is the day we die' said a staff member this week. pic.twitter.com/XHTwxwia2d

President Francois Hollande unveiled plaques at sites across the city that were attacked by the Islamic State jihadist group.

The first was at the Stade de France to commemorate Manuel Dias, 63, who was killed by a suicide bomber outside the national stadium as France were playing Germany in a football match, starting a series of coordinated attacks on the evening of November 13, 2015.

Hollande and Paris Mayor Anne Hidalgo then unveiled plaques outside bars and restaurants in the trendy neighbourhood where gunmen sprayed bullets at people enjoying a Friday evening out.

The final ceremony took place outside the Bataclan, the concert hall where 90 people were killed by three attackers during a rock gig.

A minute silence was held at each place.

The message on Sunday from many was tolerance and solidarity.

We must strive to combat stigmatisation and division — integration is the solution,” said Michael Dias the son of Manuel Dias, who was killed at the Stade de France.

“It's only by offering the same opportunities to everyone that we will manage to prevent feelings that some people have from being transformed into brutality towards all of us.”

He ended his address with: “Long live tolerance, intelligence and long live France.”