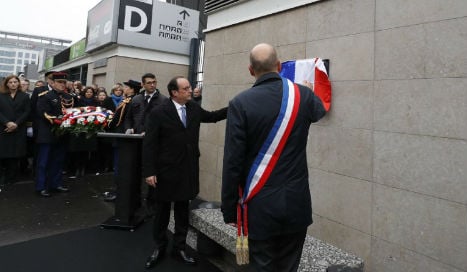 French President Francois Hollande unveils the plaque at the Stade de France. Photo: Phillippe Wojazer/Pool/AFP
French President Francois Hollande began the commemorations on Sunday morning by unveiling a plaque in memory of a man killed by suicide bombers at the Stade de France.
The man, Manuel Dias, died outside the national stadium where France were playing Germany in a football match during the first attack of a series on the evening of November 13, 2015, that killed 130 people.
Stade de France was the first of six sites targeted on November 13, 2015 where Hollande is to unveil plaques.
Together with Paris Mayor Anne Hidalgo he then unveiled plaques at bars and restaurants in the trendy neighbourhood where gunmen sprayed bullets at revellers enjoying a Friday evening out.
The Local's editor Ben McPartland was in place at the trendy restaurant district of Canal Saint Martin, watching the commemorations.

There will be six plaques like this across Paris and Saint-Denis in memory of the victims. The city won't forget those who died. #13November pic.twitter.com/zckH5XFmIL

Chloe, who has come to lay a flower at the Cafe Bonne Biere/Casa Nostra heard last year's shooting. 'It's like it was just yesterday' pic.twitter.com/9FWsrryL9A

Bouquets of flowers being laid under the plaque by families and friends of those who were killed at Carillon/Petit Cambodge. pic.twitter.com/OqHhtHCZAb

Short and sober ceremonies taking place at each Paris venue attacked on November13th. Names of victims read out followed by minute silence. pic.twitter.com/27f49VEztV

“The ceremonies were short and low key at each venue targeted by the terrorists,” McPartland reported. “The names of the victims are read out followed by a minute silence. The President and other members of the government greet some of the families then they move off to the next venue.”

15 candles line bar at the #Carillon in memory of the 15 victims 'The day we forget them is the day we die' said a staff member this week. pic.twitter.com/XHTwxwia2d

Names of victims killed at Carillon/Petit Cambodge last November are read out, including twin sisters, followed by a minute silence. pic.twitter.com/9pvkin3kKV

PM Manuel Valls arrives at Le Carillon/Petit Cambodge where Hollande will unveil a plaque with names of 15 victims of # 13th November. pic.twitter.com/C37w4Hd6Ur

“It's a painful day for all those who lost loved ones and those who survived the attacks. Indeed it is a sombre day for the whole of the city of Paris,” McPartland concluded.
In the afternoon, crowds gathered at the Place de la République to pay their respects.

Crowds gathering at Place de la République as Paris pays respects on the anniversary of the attacks. pic.twitter.com/t9Ob1b2ozW

Love hearts fill the air at Place de la République for the one year anniversary of the Paris attacks. pic.twitter.com/wps5aPYPZe

Marco who lost three friends at Bataclan: Mathieu, Marc and Thomas, ready to light lanterns in their memory. 'Paris must not be cowered' pic.twitter.com/8zm4bG5TY0

Others wrote messages for their lost loved ones on the Canal Saint Martin, and on lanterns to be floated up.

Solidarity, never forget, peace, we miss you, love, Paris forever…. some of the messages written on the lanterns at Canal Saint Martin… pic.twitter.com/2dGkwT5nVk

'Paris don't give in!', 'Paris my love' some of the messages on the lanterns to be set afloat on the Canal Saint Martin… #13November pic.twitter.com/QPn6cWXpKC

One man who lost three of his friends at the Bataclan tells us: 'There is hope even after what happened' #13November pic.twitter.com/rWxQUZdtTe

Feels like whole Canal Saint Martin neighbourhood is here to pay tribute to the 130 victims, many of whom died in bars close by #solidarité pic.twitter.com/gKV9AnF5AO

Hundreds of Lanterns are set afloat on the Canal Saint Martin in Paris in a moving homage to victims of last year's attacks #13November pic.twitter.com/oAQbGkN0mh

The final ceremony will take place at the Bataclan, the concert hall where 90 people were killed by three attackers during a rock gig in the culmination of the carnage.Rock superstar Sting reopened the refurbished Bataclan with a hugely symbolic show on Saturday.
“We will not forget them,” the British singer told the crowd in French after a minute's silence for the victims. “Tonight we have two tasks to achieve: first to remember those who lost their lives in the attack, and then to celebrate life and music in this historic place,” he said.
Sting began the emotionally charged concert with his song “Fragile”, singing: “Nothing comes from violence and nothing will.”
Many in the crowd wept during the first song, before the more upbeat “Message In a Bottle”. “I'll send an SOS to the world,” he sang. “Only hope can keep us alive.”
Scores of survivors of the attack attended the sold-out concert. Among them was Aurelien, who had been determined to return to the scene of so much horror.
“It's the first time I've been in a public space for a year. I haven't been to the cinema, to a concert, I get my shopping delivered — I've always stayed at mine,” said the man in his thirties, who did not want to give his full name.
“Tonight I'm taking my life back like it was before. It's a duty, there's an obligation to be here — because there are 90 people who can't come anymore,” he added, visibly moved, his hands trembling.
The wave of attacks profoundly shook France but Prime Minister Manuel Valls vowed Saturday that “Islamist terrorism” would be defeated once and for all.
“Terrorism will strike us again,” he warned. “But we have in ourselves all the resources to resist and all the strength to beat it,” he said.
France is part of the international coalition launching air strikes on Islamic State targets in Iraq and Syria.
At home, the country remains under a state of emergency, while terrorism and the role of Islam are key themes six months before presidential elections.
Url copied to clipboard!