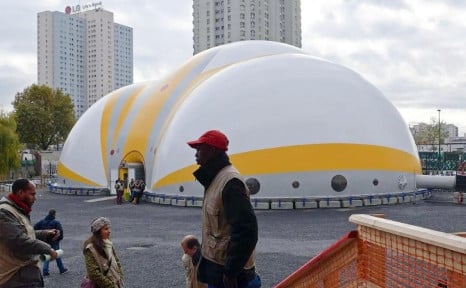 After two and half months of building, the official “humanitarian” Paris migrant camp and reception centre will open its doors on Thursday.

The new camp is located in a disused hangar, near Porte de la Chapelle, to the north of the city near Gare du Nord.

It will act as an official reception centre for migrants – mainly single men – who have just arrived in Paris. Women and children will be taken straight to specific accommodation.

“The idea is to create a place where every newly arrived migrant can be welcomed and offered dignified, humane shelter,” said Bruno Morel, head of the Emmaus Solidarite charity running the centre.

However it will not provide long term lodgings, with occupants only able to stay for a maximum of 10 days, after which the migrants will be moved on to specific accommodation designated for asylum seekers.

During their 10 days, they will be given access to help in processing their asylum applications, as well as food and medical care – “the things that are impossible to do when migrants are living on the street,” said Morel.

A giant 900-square-metre inflatable structure (see photo), has been erected as an area of orientation,where migrants can get information and advice, access to translators as well as help on returning home voluntarily.

In the converted hangar, authorities have built eight “villages” for 50 people, with each “room” having four beds. In all some 120 people will be employed at the site, along with 500 volunteers. It has been built at a cost of €16.4 million.

Authorities hope the camp will put an end to the squalid makeshift settlements that regularly spring up in the city.

The camp however has a capacity of 400, 80 new arrivals a day – well below the kind of numbers who have been sleeping rough in make shift camps in Paris in the last two years.

Only last week police cleared 3,800 migrants from their tents in the north east of the city.

“We are not naive. This centre will not solve everything,” said Paris mayor Anne Hidalgo. “But we finally have a worthy and humane alternative to the street settlements.

Plans to create a “humanitarian” refugee camp in Paris were first announced back in May by Hidalgo.

Another Paris camp designated for women and children will also open in Ivry-sur-Seine to the south of the city at the beginning of 2017.

Last month, authorities also demolished the notorious “Jungle” shantytown in the northern port of Calais — the main launchpad for attempts to smuggle across the Channel to Britain.

France's Socialist government is anxious to show it has a handle on migration in the run-up to presidential and parliamentary elections next year.