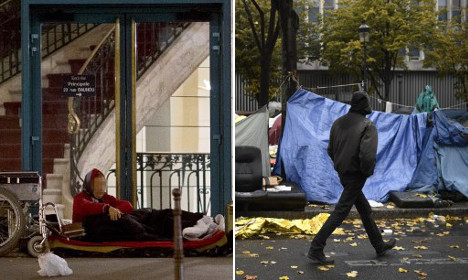 Photo: AFP
As the first snowfall has dusted France (and even Paris) this week, life has started to get even tougher for the country's homeless population, especially in the capital.
And their problems may appear to have magnified with the arrival of thousands of migrants, many of whom are also sleeping rough, particularly in Paris.
Many onlookers have expressed outrage at the thought that migrants are taking shelter spots away from the Paris's burgeoning homeless population.
“Another castle for the migrants, we don't put a tenth of the effort into the homeless in France,” wrote one social commentator, reported Europe 1.
“The true scandal is that the migrant numbers are going to explode this winter as the number of deaths among the homeless people will explode too,” said another.
Particularly vocal has been the far right National Front, with its deputy secretary general Nicolas Bay saying recently that it was “absolutely scandalous” that Paris Mayor Anne Hidalgo was “using tax payers money to lodge illegal immigrants while some French people were sleeping in their cars”.
A Facebook post written from the perspective of a homeless man has since gone viral in France, taking a sarcastic look at the situation. It read:
“My name is Antoine, I've been homeless for ten months. My homeless friends and I have been so touched by the sudden outpouring of consideration for us from the numerous people who are against welcoming the migrants. So, our new friends, we are getting ready to stay at your place. Thanks again for the invitation, and see you at yours really soon!”
READ ALSO: A homeless person died 'every 20 hours' in France

A homeless person dies every 20 hours in France, new figures show. Photo: Joel Saget/AFP
Bruno Morel from the charity Emmaus France which works with both migrants and homeless people told The Local there is no “war of the poor” between services for migrants and those who live on the street.
“In Paris there is an ambitious project to give lodgings to migrants,” said Morel in reference to the new reception centre for 400 people in the north of the city.
“And parallel to that there are structures in place for those who live on the street.”
Morel said that in total there were some 93,000 places available each night to both homeless and migrants in the greater Paris region.
Christine Laconde, head of the Samu Social charity, told Europe 1: “New migrants aren't chasing out the homeless, this is nonsense.”
“If there is any competition it's between different situations among the homeless,” she said, explaining that a shelter would be more likely to take in the more vulnerable of two families if they had to make a decision.
Xavier Emmanuelli, the founder of SAMU charity in Paris added: “Speaking about some kind of competition is unhealthy.
“When someone is in an emergency situation, that means they're in danger – such as from freezing to death – we take everyone in.” (AFP
Different ports of call
Migrants and French homeless people have different first ports of call when looking for emergency shelter.
Migrants with papers have a specific administrative status in that they can first seek temporary housing at a reception centre (centre d'acceuil et d'orientation – CAO), and it's here that they can lodge their asylum applications.
There are some 25,000 spots available across the country in such centres, and it was to these that many of the 7,000 migrants from the Calais “Jungle” camp were sent.
If they choose asylum then they can seek accommodation in a CADA centre.
If migrants are are given refugee status by France, they can stay up to a year in a CPH provisional lodging centre.
If all these places are overflowing, authorities can send migrants to social housing or hotel rooms.
This is all in theory of course and many migrants, even those who are in the system, often end up living rough in Paris or in Calais. When they are eventually evacuated as 3,800 were in Paris last week, they are sent to emergency accommodation, in this case throughout the greater Paris region. Often that means sports halls if there are no places in official centres.
Homeless people, on the other hand, are handled differently.
They are urged to contact the SIAO, a service that helps them find a bed among the 28,890 spots in emergency shelters or the 42,359 at rehabilitation centres, where they are helped to find a more permanent option.

A homeless man in Paris. Photo: AFP
France also offers an average of 37,000 hotel stays each day and 209,000 spots for homeless people who are elderly or have disabilities.
Despite the seemingly high number of beds on offer, many still sleep on the streets after seeking out help.
There has been a 2.4 percent increase of requests for such homes housing over the past year, according to the most recent stats from July, together with a 5 percent increase in the refusal rate that comes when there aren't enough beds available.