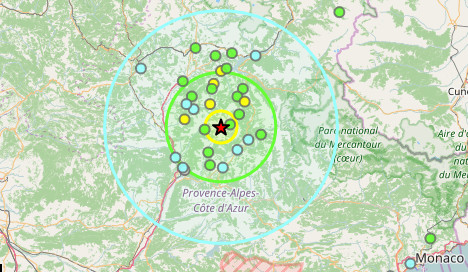 Photo: FranceSeisme
The biggest were at 3.45am and then again three minutes later, when earthquakes struck with magnitudes of 3.7 and 4.1 respectively.
The epicentre was around 30 kilometres from the town of Gap. The series of quakes came over a 10-hour period ending at 7.30am on Thursday. “I could feel the walls move,” a resident in Haut-Alpine told Le Dauphiné Libéré newspaper.
Another in Venterol said she heard “a huge noise with vibrations, as if something heavy had fallen.”

The series of quakes finished with two at 7am and 7.30am on Thursday, with magnitudes of 2.0 and 2.1 respectively.

No structural damage or injuries were reported.

Experts have told The Local previously that the south eastern corner of France is due a big earthquake at some point in the future.
“We don’t know when a big one will come, but it will and there will certainly be fatalities,” said French seismologist Remy Bossu from the European Mediterranean Seismological Centre (EMSC) in Paris

And when it does strike, Bossu says, we could see the scale of damage seen in the historic Italian town of L’Aquila which was devastated by an earthquake in 2009 that left nearly 300 dead. After the quake six scientists were jailed for manslaughter for playing down the risks of earthquakes.