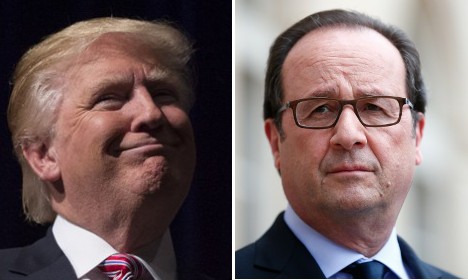 Reacting to Trump's shock victory in the US election race Hollande said the result “now opens a period of uncertainty”.

The president congratulated Trump: “which is natural between two heads of state”.

In a televised address, he also said that “this context calls for a united Europe, capable of making itself heard and of promoting policies wherever its interests or its values are challenged.”

Hollande had been late to react on Wednesday but previously had this to say about Trump: “His excesses make you want to retch, even in the United States.”

Speaking on a trip to China Ayrault tried to give reassurances that even if France was a little concerned by the future it would work with Trump.

“France is an ally of the United States, we are a key partner of the US,” said Ayrault (see photo below with John Kerry, US Secretary of State) “We need to work together for stability and peace in the world and for a world which tackles the key issues facing it.”

But it was clear Ayrault and France have no real idea about what the future will hold when the nonconformist Trump eventually takes power.

“It makes you think, it asks questions. It has certainly provoked reactions,” he said, when asked about Trump’s personality.

But Ayrault said there were real questions about serious global issues that Trump would need to give reassurances on.

“We are going to need to understand what the new president will want to do,” he added. “Because what he has said up to now causes much concern.

“What is going to happen to the Paris climate deal? On the Iran nuclear deal? These are the key questions we are already asking ourselves.”

Ayrault also mentioned the fight against terrorism and the issue of Syria, both issues that directly affect France.

“We don’t want a world where every country cowers behind its borders, puts up walls and fixes nothing… that is selfishness which triumphs,” Ayrault said.

He also called on Europe to be more “united, active and offensive”.

France's ecology minister Segolene Royal warned climate-skeptic Trump that he could not interfere with the implementation of the Paris climate deal.

But arguably the most significant reaction in France came from Alain Juppé, who is predicted to win the conservative primary later this month. Juppé would then go on to become president in May.

Juppé, the mayor of Bordeaux said: “The world needs a calmed American democracy, one that contributes to stability in the world, something that today is seriously threatened.

“It's up to France and Europe to put themselves in a position to defend their interests in their discussions with the American administration,” he added.
“The French have more need than ever of a strong France and a President who will be heard and respected by her partners.
“To the French I want to underline the risks that demagogy and extremist bring to democracy and the vital nature of the choices that they have to make.”