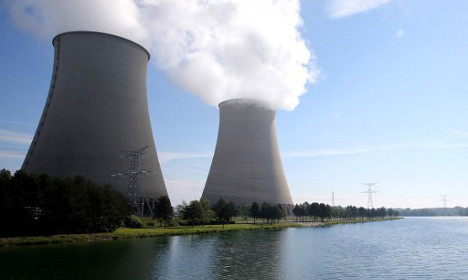 The nuclear power plant of Nogent-sur-Seine in central France. Photo: AFP
It might be time to bring out the extra blankets at home.
Grid operator RTE warned on Tuesday that it would have to take “exceptional measures” to keep the French warm this winter due to the fact that 20 of the country's 58 nuclear power plants have been temporarily disconnected for safety checkups.
These measures may include “short power cuts in certain areas of the country in order to continue providing electricity to homes during the winter period”, it said in a statement.
And the French will be grateful for anything that can keep their homes warm, especially with recent temperatures that have already proven to be colder than usual in France, the operator noted.
Indeed, snow has already fallen in the Alps this week (and even Paris was given a dusting of snow on Monday).
While the power cuts aren't forecast to hit households as yet, the operator announced plans to release an app and a website early next month to let residents know how and when to save electricity in peak-demand periods.
An example of the flash alerts that will be available from December 5th can be seen below, warning the phone user that a peak period is on the way. The operator suggested that at peak times, between 8am and 1pm and again between 6pm and 8pm, people should lower the household temperature by one to two degrees Celsius.
Residents should also try not avoid using household appliances like washing machines and dishwashers during these times, and should switch off lights in empty rooms or when leaving the house.
The electrical shortages are predicted to occur within the first three weeks of December, the operator said, adding that it would first tackle them by increasing power imports and potentially paying industrial customers to turn off machinery.
The potential power cuts around the country would depend on the extent of the shortages.
France's Nuclear Safety watchdog ordered the nuclear plants to be temporarily closed after weak spots were found in the steel used in the new plant at Flamanville in northwestern France.