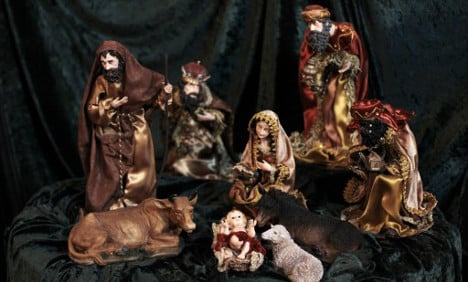 Photo: AFP
It's now an annual row in fiercely secular France: Should Christmas nativity scenes be on show in public buildings like Town Halls, where the wearing of religious symbols is banned?
This year the row began even before the Christmas lights have gone up on the Champs Elysées thanks to complaints about the existence of nativity scenes at the Vendée's council building in western France, and another in Melun in the south eastern suburbs of Paris.
Both nativity scenes were contested by local Free Thinking Associations, who argued that public places are no place for the traditional Christmas scene of Baby Jesus in a manger surrounded by cattle and shepherds.
They argue that such a scene does not stand in line with France’s 1905 law on the Separation of Church and the State.
The Conseil d'Etat ruled on Wednesday that the scenes should be allowed in public places, on the condition that they are temporary, have no signs of religious preaching, and are of a cultural or festive nature. The French, in general, quite enjoy having a nativity scene in a public place.
A 2014 survey from Le Parisien newspaper found that 86 percent of 12,000 respondents were in favour of having the scenes on show in public.
But secularists have made an annual tradition of fighting the custom, kicking off what the French media regularly refer to as a “nativity war”.
Secularism, referred to as “laïcité”, is considered one of the founding principles of the French Republic, but is a matter of much debate in France, especially when it comes to education.
In 2004 France introduced a controversial law that banned the wearing of religious symbols, most notably the traditional Muslim headscarf, in schools and other state buildings.
Although the law doesn't refer to any one specific religion and was supported by most French people, critics saw the law as an attack on Islam under pressure from a far-right whose popularity and influence has been growing.