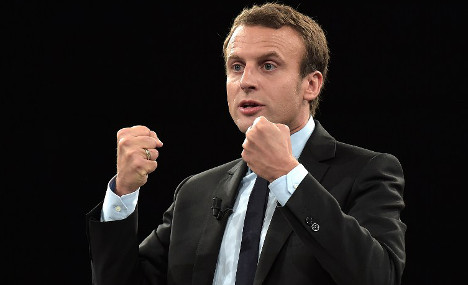 According to AFP, whose sources were members of Macron's entourage, the ex-minister will officially announce his candidacy before December 10th, when he is set to hold a rally in Paris.

Speculation that Macron would run for the top job began in August when he quit President François Hollande's government.

He has since founded his own political movement En Marche! and vowed to lead his supporters “to victory in 2017”.

After walking out on Hollande Macron promised to “transform France” and “bring hope to a country in need”.

The 38-year-old said previously he had “seen at first hand the limits of our political system” and that quitting the government of President Hollande would enable him “to be free” to push forward his own agenda.

Macron would be a fresh face in a presidential field that includes former president Nicolas Sarkozy, 61, and 71-year-old ex-prime minister Alain Juppe — both right-wing candidates.

Marine Le Pen, 48, of the far-right anti-immigration National Front, is standing for a second time in presidential elections and many polls show she is likely to reach the second round of voting. (Macron with his wife Brigitte, his former teacher. AFP)

Macron, like most French politicians a graduate of the prestigious Ecole Nationale d'Administration, said he would “present the diagnosis of France drafted with the help of tens of thousands of people.”

“I will then propose far-reaching action that can be taken,” he said recently.

Macron, a business-friendly former protege of Hollande, will aim to exploit the deep divisions in the French left to make a
run for the presidency. His straight-talking, anti-establishment flair has seen him attract many young, cosmopolitan supporters.

But Macron, despite having high approval ratings in the polls faces a fair few hurdles in his bid to get the keys to the Elysée Palace.

It is unclear how wide the appeal really is of such a young man who has never held elected office, nor does he have the support of a party.

In September an opinion poll, carried out by pollsters Ifop for Europe 1, found that 53 percent of respondents did not want the ex-minister to run for France's top post.

A second poll on the same subject found that only 34 percent thought Macron should run for president, while two thirds felt the opposite way, according to Elabe.

A poll last month by Kantar Sofres-OnePoint put Macron at 14 percent, ahead of President François Holland on 9 percent, but far behind Marine le Pen and Alain Juppé, who each had the support of 28 percent.'