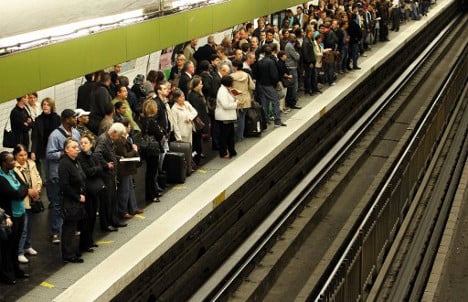 All photos: AFP
If you've ever commuted to work by Metro or RER in Paris then you're no stranger to delays.

But now we know just how bad they are, thanks to fresh figures from transport planning app CityMapper.

The app has collated data from the month of October based on the number of delays across the period, together with the average number of minutes that each line was affected by these delays.
CityMapper noted that 50 percent of all incidents were registered in peak hours of 6am to 9am and 5pm to 8pm – even though these hours represent just 30 percent of the lines' operating hours.
And coming in at last place – and by a long shot – was the RER E line that serves the city's eastern suburbs. The five RER commuter lines all finished within the bottom six places (on a list of 19 lines), with D performing the “best” with an average two-hours delay time.
Next best was line A, then B, then C, before E which took last place.
A spokesperson from CityMapper noted that the RER commuter lines were particularly badly hit by delays due to reports of “suspicious packages” reported on board, signaling failures, and technical problems.
Paris transport chiefs at RATP have suggested that the unofficial statistics should be taken with a pinch of salt.
“The only analysis that is relevant is one that has been taken over a long period of time and that has been matched with a detailed analysis of the causes,” it said in a statement.
If being stuck on a Paris Metro is your idea of hell, don't forget you can sometimes walk just as quickly. A version of the Paris Metro map listing walking times between each station went viral last year.
Transport planner Guillaume Martinetti told The Local at the time that he hoped the map would get people out and about more.

TRAVEL
The Paris transport works that could disrupt your summer
Url copied to clipboard!