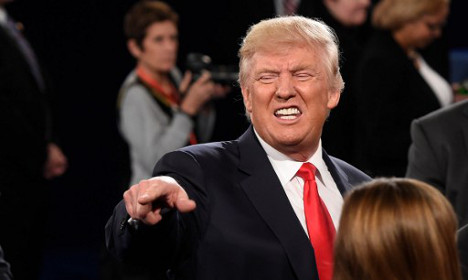 Photo: AFP
A recent survey found that 41 percent of French people were “not interested” in the US presidential election, a higher rate than any of the other six European countries surveyed.
In fact, according to the YouGov survey, 72 percent of Germans and Swedes said they were interested, with the Danes close behind at 70 percent.
But just 58 percent of the French said the same, with 11 percent saying they were “very interested” (the lowest rate in Europe), and 47 percent admitting to being “fairly interested”.
While the rest of the world seems to be on tenterhooks are the French really indifferent about Tuesday's election result?
A quick look at the French press on Monday, the eve of the US election, suggested the country has other things on their minds.
While the top story on Le Monde newspaper, seen as the paper of reference in France, was on the US election, most other newspapers had other priorities, from an attempt to depose president François Hollande (Le Figaro) to the French government's plan for a “monster database” (Le Parisien) to the battle to become the presidential candidate for France's green party (L'Express). Ouest France, the country's biggest selling daily, had a story on the Vendée yachting race in top spot.
Perhaps it is no surprise the French are slightly less preoccupied with the election on the other side of the Atlantic. Indeed some thought they showed the same indifference in the run up to the Brexit vote in the UK.
For starters, their own election is looming, meaning there's constant speculation about whether Hollande will run again and if not then who on the left will?
There's also the battle to be the right wing candidate (and probable next president) which is coming to a head, and of course the growing influence of the far right and Marine Le Pen is always a newsworthy subject in France.

Photo: AFP
Politics aside and the French have plenty more to worry about. The scars of recent terror atrocities are set to be reopened this week as France marks the one-year anniversary of the Paris terror attacks that left 130 dead.
And there's always the high unemployment and economic woes that continue to preoccupy the French nation.
Police officers across the country have been protesting against a rise in violence and despite the closure of migrant camps in Calais and Paris, no one really thinks the refugee crisis is over.

In other words France can be forgiven for not having Trump and Clinton on their minds right now. But let's not paint a picture that the French don't care. Many do.
For what it's worth the YouGov survey showed the French who are following the race for the White House have big worries about the prospect of Donald Trump becoming president this week.
Only one percent of French respondents said that Trump would be “a great president”, while a full 51 percent think he would be “terrible”. Some 52 percent of respondents said they'd be “afraid” if he were to win.
Meanwhile, 44 percent said they would be “relieved” to wake up on November 9th to discover that Trump’s Democratic opponent Hillary Clinton had won the election.
And it's not just the French public who don't count themselves among the Trump fans.
Donald Trump has received a frosty reception from France's President Francois Hollande, who said in August that the presidential candidate “makes you want to retch”.
“His excesses make you want to retch, even in the United States, especially when — as was Donald Trump's case — he speaks ill of a soldier, of the memory of a soldier,” Hollande told journalists in Paris.