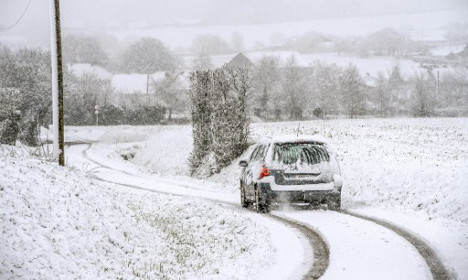 File photo: AFP
Good news for skiers: The snow has arrived in the Alps.
It was only around three centimetres at its heaviest Alpe d'Huez, but the BFM TV channel reporting that meteorologists are predicting more and the reservations for winter ski getaways are increasing.
But what really took social media users by storm was when Paris got a dusting of snow on Monday morning.
Indeed, the French word for snow, neige, topped the Twitter trends throughout the morning as the French shared their wintery snaps.
Motorists were perhaps not as impressed with the weather, with the Le Parisien newspaper reporting 540 kilometres of tailbacks across the Paris region.
Here is a selection of the best shots from Paris this morning:

It's snowing in Paris. Climat you're drunk. #paris #snow pic.twitter.com/3XEo0774Oc

Huge snow flakes on Paris at this moment. Can you believe it ??? pic.twitter.com/MGT71S7f7w

France's weather agency Météo France had predicted the snowfall for between 7am and 10am, even though the temperatures were forecast to be a few degrees above zero. France on the whole will see a fairly chilly day, with the vast majority of the mainland unlikely to see temperatures in double figures throughout the day.