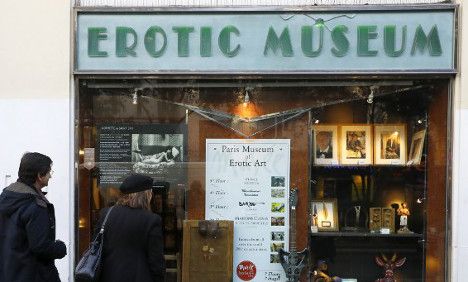 Everything from a forest of phalluses to South American objects based on female genitalia, to a Thai pipe shaped liked a reclining male member went under the hammer.

Much of the 2,000-item collection, including its oldest object, an 18th-century marble plaque of the Hindu god Vishnu from an Indian tantric temple, comes from Asia.

The auction also included many drawings and photographs from late 19th-century “Belle Epoque” Paris, when the city was seen as the world capital of pleasure.

There were also objects taken from France's legal brothels or “maisons closes” which were shut down after World War II.

One of the highlights of the sale, handled by Paris auctioneers Cornette de Saint Cyr, was an imposing modern steel sculpture showing a woman having sex with a robot. It went for over 38,000 euros ($42,000), way over its estimate of 7,000-8,000 euros.

More than 500 potential buyers were present in the auction hall which a similar number were bidding via the internet.

“Many people came here in the hope of acquiring a souvenir of this unforgettable museum,” said auctioneer Bertrand Cornette.

A work by Salvador Dali, a bas-relief version of his painting entitled “Young Virgin Auto-Sodomized by the Horns of Her Own Chastity” went for 20,608 euros, despite its inital estimate of 2,000-3,000 euros.

A picture of a topless Mona Lisa was sold for over 13,000 euros.

Other lots included drawings by Georges Wolinski, one of the cartoonists killed during the gun attack on the offices of the Charlie Hebdo satirical magazine in January 2015.

The artist, known for his saucy sense of humour, had been a supporter of the museum.

Just down the street from the famous Moulin Rouge cabaret in Pigalle, the closure hastens the slide of Paris' naughtiest neighbourhood towards respectability.

“We never got any support from either the state nor the city of Paris,” Khalifa told AFP earlier. “Although it has to be said, I could never imagine politicians supporting us.”