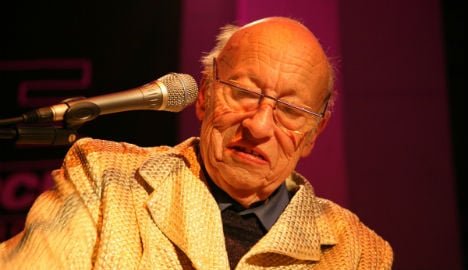 Jean-Jacques Perrey performing in 2006. Photo: Randy Yau/Flickr
Perrey died in the Swiss lakeside city of Lausanne after a battle with lung cancer, his daughter Patricia Leroy said.
The self-taught Perrey quit medical school in 1952 when he met George Jenny, inventor of the Ondioline — a new type of electronic keyboard instrument that was a forerunner to the commercial synthesiser and launched a career in music.
He was an early user of the Moog synthesiser which revolutionised electronic music in the 1960s. Perrey experimented with several musical genres, producing two albums aimed at helping sleep.
His music featured on a Beatles 1968 Christmas record and has been used by hip-hop artists and rappers such as Gang Starr, Ice Cube and Dr Dre. It has also been used at Disney theme parks.
Perrey said his music was fun and had no ponderous messages. “Unlike some composers who aim at communicating a 'message' to humanity through their works, I have no such intention,” he wrote in 1968.”My only purpose is to try to bring the listener some joy and pleasure. There is nothing more than a message of humour in my music,” he said.
Perrey retired in 2010 after 27 albums. His music is still used for advertisements as well as cartoon and TV shows including “South Park” and “The Simpsons”.
Here are Perrey's five most popular tunes on Spotify.