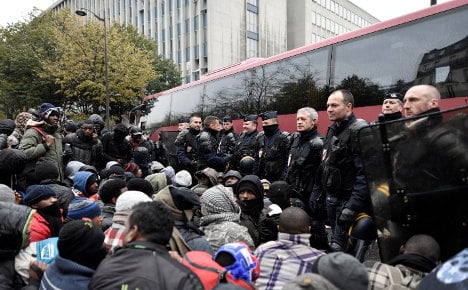 Paris officials said some 3,800 migrants were relocated from squalid street camps in the north east of the city on Friday morning.

Officials gathered several hundred male migrants shortly before 6.00 am (0500 GMT) behind a police line in a part of the camp housing Afghans.

This is the scene at Stalingrad Metro station in Paris where police have blocked roads as they prepare to move 3,000 migrants out of camps pic.twitter.com/mD4uF1gEqL

Buses were due to take them during the morning to accommodation centres around the greater Paris region of Ile-de-France.

French housing minister Emmanuelle Cosse witnessed the vast operation, which was expected to take all morning.

“We have places to accommodate everyone,” said Cosse. Authorities said the migrants would be taken to around 74 centres in the Paris region.

Police move in to clear out migrant camp near Stalingrad Metro station in Paris. Lots of women and children waiting to be bussed away. pic.twitter.com/FAbyQnsGTQ

However given that camps in the area have been cleared over 20 times over the past months many locals and charity workers had little optimism that Friday's evacuation would be a long term solution.

Laura, 26, has been volunteering in the area for months, and is unimpressed with the police effort.

“This isn't an evacuation, this is a roundup. They're being treated like cattle,” she told The Local. “They're worried, they're afraid. They weren't told what was happening this morning and they don't know where they're being taken.”

While volunteers handed sandwiches and pastries to the migrant groups, police maintained a tight ring around the refugee groups.

“It's horrible, we can't get to them and they can't get to us. We've been here for months, we know these people,” Laura said.

“And this round up is no solution. More migrants will be back here tonight.”

The arrival of the first bus, before dawn, was greeted with cheers.

“I don't know where we are going,” said Khalid, 28. “The important thing for me is to have my papers. I have been here in a tent for a month, it's good to leave.”

Huge police (and media) presence in north east Paris as some 3,000 migrants will be moved from camp to some kind of accommodation today. pic.twitter.com/OYEChG4Vzn

By around 8am police there were still huge numbers of migrants waiting to bussed out of the area. Women and children were separated into one group and waited peacefully surrounded by riot police with shields.

There were scenes of chaos however when police appeared to allow a group of Afghan migrants to set up their tents again.

Teams of cleaners, wearing gloves and masks also moved in to clear away the scores of tents from the various mini camps.

Tooth brushes and bottles of water lay strewn around the area.

Cleaning up of makeshift camp has begun. Tents under the overground Paris Metro being taken away. How long before they appear again? pic.twitter.com/eG7asvGeMR

Bulldozers move in on the leftovers at the Stalingrad migrant camp in Paris as thousands are evacuated. pic.twitter.com/D99mpIqreU

The operation was watched by a large media presence and a numerous members of associations who liaised with authorities.

The operation comes after a major operation last week to clear the notorious “Jungle” migrant camp at the northern French port of Calais, which has for years served as a jumping-off point for migrants attempting to stow away on trucks and trains bound across the Channel for Britain.

Some 6,000 people, mostly Afghans, Sudanese and Eritreans, had been living in the Jungle in squalid conditions as Europe struggles with its worst migration crisis since World War II.

The Paris encampment has also been cleared several times in recent months, in July and September.

But the tents have been spreading across the pavements again in recent weeks, with some 3,000 people sleeping there at present, according to sources close to the operation.

Many however are asking how long before the tents reappear once again?