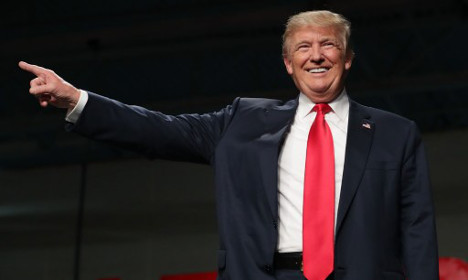 Photo: AFP
Robert Trump is a 67-year-old motorcycle enthusiast who lives in Brecé, a town of 800 in the northwestern department of Mayenne in .
And he made headlines all over the French media week after claiming that he is a distant cousin of Republican presidential nominee Donald Trump.
“In theory, he is the second cousin twice removed of my great grandfather,” Monsieur Trump told the France Bleu radio.
“I'm not 100 percent sure, but we do have a common ancestor.”

There are around 50 people with the surname of Trump in France, but this one has researched his geneaology and is convinced of the connection.
He added that his own father had received a letter from a certain “Donald Trump” 25 years ago seeking family connections in Europe.
“My Dad said 'What, is he taking the mickey? and threw the letter in the bin,” Trump explained.
And there are other hints that the two men may just be related.
“I used to have red hair like him a few years ago before I went grey. People used to call me 'The Red Englishman' when I was young,” he said, adding that his family was originally from Manchester in the UK.
Trump (the French one) says that he has found himself at the butt of a few jokes in his little community in recent weeks.
“My neighbours yell out 'Here comes the president' when I'm going by,” he said.
French Trump said that it wouldn't bother him if it was Hillary Clinton who won the US election next week, but he'd look forward to the bragging rights if Trump won.
“If Trump wins then we can say that we have a distant relative who was the president of the US. It wouldn't change my life but it'd sure be original,” he said.
Url copied to clipboard!