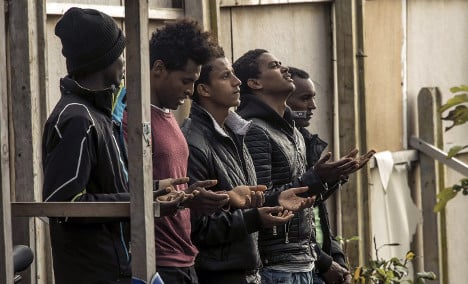 French authorities on Wednesday started moving out the remaining 1,500 unaccompanied children living next to the razed “Jungle” migrant camp in Calais to shelters around the country.

A first bus carrying 43 minors left the area around 8:30 am (0730 GMT) for the southwest, rapidly followed by a second one.

More than 30 buses have been deployed to transfer the minors to 60 centres nationwide.

The dismantling of the informal part of the camp that once housed up to 10,000 migrants, most of whom hoped to reach Britain, was completed on Monday night.

Over 4,000 adults who had been living in tents and shacks — mainly Afghans, Eritreans and Sudanese — were moved to reception centres across France last week, before the bulldozers moved in.

That left nearly 1,500 underage migrants, who stayed behind in a secure container park run by an NGO, and around 400 women and children living in a separate care facility a few hundred metres away.

The plight of the unaccompanied children has been the subject of testy exchanges between France and Britain.

France is hoping that Britain will take in most of the unaccompanied minors who travelled alone across the Mediterranean and up through Europe, in the hope of stowing away on trucks crossing the Channel to England.

After initially dragging its heels on the issue, Britain in mid-October speeded up the transfer of child refugees.

In the past two weeks it has taken in around 300 children with family or contacts across the Channel and promised to take hundreds more.

Some aid agencies have warned that scattering the children around France could hold up that process.

French authorities have assured that the minors still be able to pursue their dream of Britain from the far-flung shelters to which they are sent.

“No further transfer applications will be handled in Calais,” an official document circulated among the teens Tuesday read.

The lure of Calais

France's Socialist government had been under pressure to move the remaining minors out of Calais, to avoid the re-emergence of a new shanty town.

Various squalid settlements have existed for decades around the city, which is home to one of the country's biggest ports and the Channel Tunnel rail link connecting France and Britain.

Over the past year the Jungle had mushroomed in size as hundreds of thousands of people fleeing war, poverty and persecution in Middle East and Africa poured into Europe.

Speaking to La Voix du Nord local newspaper Tuesday President Francois Hollande vowed there would be “no new settlement” on the site of the Jungle.

“It has been evacuated. It will be secured. No-one else will be able to move there,” he said.

Some minors fear that being moved away from the Channel coast will diminish their chances of making it to Britain.

“Around half” of the under-18s moved to children's shelters in eastern and western France last week had already slipped away, the head of the France Terre d'Asile charity, Pierre Henry, said.

“They want to return to Calais,” he said.