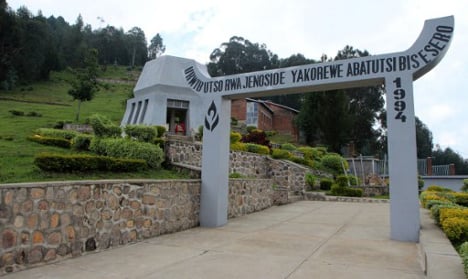 A memorial for the Rwanda genocide. Photo: AFP

Rwanda's National Commission for the Fight Against Genocide (known by its French acronym CNLG) issued the list on Monday, a month after French investigators said they were re-opening a probe into who shot down then-president Juvenal Habyarimana's jet triggering the genocide in which 800,000 mostly Tutsi people were killed.

“The refusal to put an end to the judicial investigation and to exonerate Rwandan leaders who ended the genocide is designed to camouflage these responsibilities.”

That inquiry was reopened following a deposition submitted by former Rwandan army chief Faustin Kayumba Nyamwasa, a one-time confidant of President Paul Kagame who has again pointed the finger of blame at Kagame.

The shooting down of the plane falls within French jurisdiction because the crew were French.

Last month Kagame warned of a “showdown” with France over the allegations.

The row over responsibility for shooting down the plane has wrecked diplomatic relations in the past, causing a severing of ties between 2006 and 2009.

The CNLG accused the 22 senior French officers of involvement in the genocide “both as perpetrators and accomplices”.

Among those accused are the former army head, a chief of staff to former President Francois Mitterrand and the French commander of the UN-mandated Operation Turquoise which intervened in Rwanda two months after the start of the genocide.