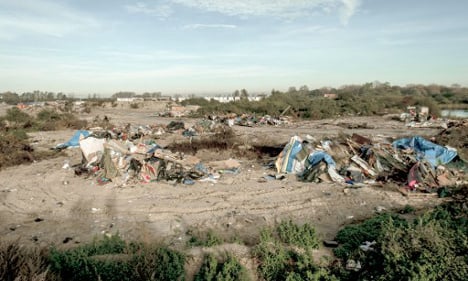 The 'Jungle' camp is no more. Photo: Philippe Huguen/AFP

Squads of workers using diggers, tractors and cranes had torn down the final tents and makeshift migrant homes on the windswept stretch of northern coastline.

Sand, mud and piles of rubbish now mark the spot where thousands of migrants and refugees passed through as they tried to sneak into Britain, making the “Jungle” camp a symbol of Europe's migrant crisis.

Only a church and two small mosques have been spared destruction and they will be preserved only for as long as more than 1,000 unaccompanied teenagers are housed nearby in temporary containers.

The minors await news of their transfer to Britain or alternative housing in France, with their fate a source of enduring tension between London and Paris.

“They said there was going to be a bus today. When?” asked 18-year-old Mohammed from Sudan, as he rode a bike near where a street of shops had stood in the camp.

At its height the camp was home to more than 10,000 people, with the squalid conditions, crime and disruption to Calais's crucial port and train link to Britain a source of anger and embarrassment in France.

Six months before elections, Socialist President Francois Hollande is on a drive to take migrants off the streets and transfer them to shelters around the country where they can seek asylum.

And he has promised that the “Jungle” will not be reborn in Calais. saying he understands that the city's residents had endured a tense situation for a long time.

“I assure them that there will be no resettlement on the land… no one will be able to get back on it,” Hollande said in an interview to be published on Tuesday in regional daily La Voix du Nord.

While the Calais camp is now demolished and thousands have been sent to lodgings elsewhere, the fate of the unaccompanied minors housed in containers near the site remains unresolved.

France has called on Britain, the intended final destination for most Jungle migrants, to do more. Since mid-October, Britain has taken in over 270 children and has promised to take in hundreds more.

While there appears to be fresh political will to tackle the migrant crisis in France, activists warn that a new camp in Calais could sprout up and that the country lacks sufficient capacity to house all those in need.

Concern is also mounting in Paris where the number of migrants sleeping rough in the northeastern Stalingrad area of the city has swelled since last week when the Calais evacuations began.

In a letter to Interior Minister Bernard Cazeneuve that was made public Monday, the Socialist mayor of the city sounded the alarm over the “dramatic humanitarian and sanitary situation” in the northeast.

On Monday, workers in white overalls backed by a digger began clearing tents and mattresses from a street in the area, where around 2,000 migrants have been living under an overhead metro line.

Riot police with shields sealed off the area during the operation – a prelude to a bigger effort in the coming days to clear the camp, which is a long-standing magnet for the homeless in the capital.

“If they don't give us shelter, why are they destroying our homes?” an Afghan said at the scene, declining to give his name.

Another said he had nothing left besides “my clothes, my shoes and my documents.”

The city is to open a migrant reception centre with capacity for 400 single men – a fraction of those seeking shelter – in the coming days.

Various squalid settlements have existed for decades around Calais, which is home to one of the country's biggest ports and the Channel Tunnel rail link connecting France and Britain.

Major camps have been cleared there at least twice before, in 2002 and 2009. From April 2015, the “Jungle” camp emerged as hundreds of thousands of people headed to Europe from the Middle East and Africa in the continent's biggest migrant crisis since World War II.

The migrant arrivals in France were mainly Afghans, Iraqis, Eritreans and Sudanese, who would try to stow away on vehicles heading to Britain.